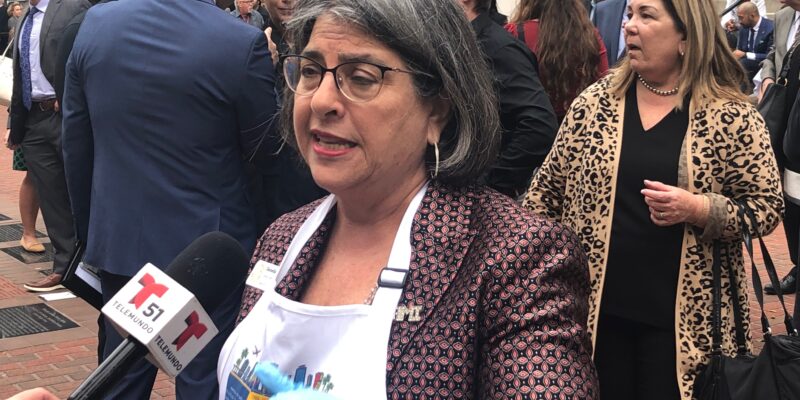 The sunshine state is a battleground state, which means that all eyes are on Florida concerning whether or not it will remain red in the upcoming 2020 election.

In one of the many major races that are currently developing, Daniella Levine Cava is a Miami-Dade Commissioner for Florida’s 8th District, and she is also a Democratic candidate for Mayor of the county.

In an exclusive interview with The Floridian, Commissioner Cava discussed some of the reasons why she’s running for Mayor, noting that “siempre quiero server si puedo.”

When asked about her campaign status, Cava explained, “I feel really good. We have great momentum. We have over 9,000 signatures, putting me on the ballot,” adding that “we’re gonna qualify by petition.”

Furthermore, she noted that her “donor base is everybody. It’s very, very broad. Lots of small donors. I get $5, $10, $20 a month. Each of those people, it feels like a hug. Really, thousands of people around the county who are ready for a change. They’re ready for somebody who is not a career politician. Somebody for the future and not the past.”

Cava was asked to elaborate on affordability, and she explained that “our salaries are low and our costs are super high. We’ve got the highest cost of housing relative to our salaries, so we have the highest percentage of people spending 50% of their income on housing costs. This is outrageous.”

So, “that means they’re putting aside medical care, their children’s care, maybe food, medicine, you name it. They are suffering every day. They’re working multiple jobs, and if they’re transit-dependent, they’re stuck all day long riding around on buses.”

In terms of the solutions to this issue, she detailed that “we’ve got money at the local level that is not getting out into the community. We’re not producing those homes, so we have money from our surtax that is not moving out… we can also reduce the pricing of construction of housing by reducing permitting time, doing form building, other reductions in the cost of construction, and we have county property and other public property that we need to deploy rapidly.”

With the start of the year underway, Cava is looking to continue her political sights on reforming Miami-Dade county, and voters are all ears as the election cycle rolls out and rolls on.