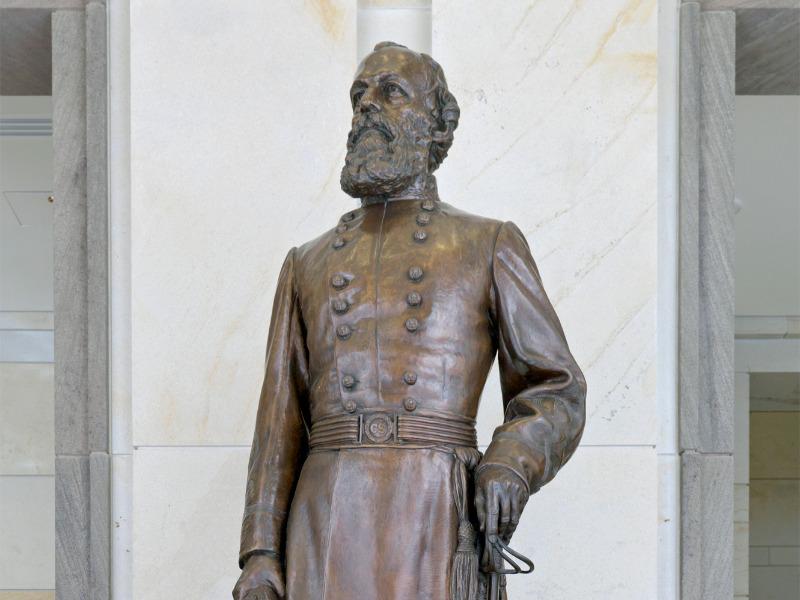 TALLAHASSEE — Lake County commissioners backed a local historical society’s plan to house the statue of a Confederate general whose likeness has represented Florida in the U.S. Capitol for nearly a century.

After hearing two hours of mostly emotional objections from area residents, the commission voted 3-2 on Tuesday to support relocating the bronze statue of Confederate Gen. Edmund Kirby Smith from National Statuary Hall in Washington, D.C. to the Lake County Historical Society and Museum, a county facility in Tavares.

State lawmakers decided to replace the Smith statue in Washington with a statue of civil-rights leader and educator Mary McLeod Bethune. Smith has little connection to Lake County, and eight area mayors have opposed relocating the statue to the Central Florida community.

Lake County Commission Chairwoman Leslie Campione said she felt “sorry” for people who view the planned relocation of the Smith statue to their community as “indicative of current day racism.” She dismissed such allegations, while noting the national political divide is “coming down to Lake County.”

“It is important to preserve statues and monuments which tell the story of where we’ve come from and where we are today, even if those artifacts invoke strong emotions,” Campione said.

Voting against the plan, Commissioner Wendy Breeden said she’d prefer the statue be displayed in Tallahassee or one of the national cemeteries in the state.

The county’s stance could help Gov. Ron DeSantis, who hasn’t publicly replied after eight mayors of Lake County communities recently asked him to block the relocation of the statue to their county.

When asked about the request from the mayors, the governor’s office has pointed to a decision by the state’s Statue Location Selection Committee to choose the county historical society from among three applications for the long-term loan agreement.

State lawmakers voted in 2016 to replace the Smith statue amid a nationwide backlash against Confederate symbols that followed the 2015 shooting deaths of nine black worshippers at a historic black church in Charleston, S.C. They later chose Bethune to replace Smith.

The mayors’ letter and commission vote moved forward after DeSantis sent a formal request July 10 to the architect of the U.S. Capitol to substitute the Bethune statue for the Smith likeness.

Lake County resident Eva Turner told the county commission the statue’s arrival “will rekindle old stuff. And you know what I mean when I say old stuff.”

“Don’t let Lake County appear to be on the wrong side of history, yet again,” Hill said. “I’m referring to this county voting for Willis McCall for 30 years, who absolutely was a tyrant, who abused African-Americans in that building.”

McCall was the county’s sheriff for nearly 30 years starting in 1944. He is perhaps best known for his handling of the Groveland Four, four African-American men accused of raping a white woman in 1949. The four were pardoned by DeSantis and the Cabinet in January.

In 2007, the county commission deemed McCall a “bully lawman whose notorious tenure was marked by charges of racial intolerance, brutality and murder.”

Several speakers said the Smith statue should be rejected because of the Confederate general’s lack of ties to the community.

“No matter how many degrees of separation that’s applied here, to try to connect the dots to Kirby Smith and Lake County, there’s not real connection, none,” said county resident Alan Harris. “There is no real need for this statue, other than to further divide us.”

Smith was born in St. Augustine but had few ties to Florida as an adult. As commander of Confederate forces west of the Mississippi, Smith was considered the last general with a major field force to surrender. He spent his later years as a college professor in Tennessee.

Not every speaker during Tuesday’s meeting was opposed to the statue.

One proponent said Smith is representative of history and “not everybody that fought in the Civil War was evil.”

Another said while African-Americans “have solid points” in opposing the statue, the animosity was being raised by liberals and Democrats.

Smith’s statue has represented Florida in the U.S. Capitol since 1922.

The county historical society’s board of directors wrote to Campione last week explaining the decision to “provide a home” for the statue as preserving artifacts and relics, particularly those with Florida and Lake County ties. And, the letter said, the statue will not glorify Smith or the Confederacy.

The letter also noted the display will highlight the move by lawmakers to remove the statue, Bethune’s achievements, the movement to remove Confederate monuments from public squares, and “finally the debate in Lake County over the decision to place this statue in the war gallery of a museum in a historical building that has also seen hardship, sacrifice, personal tragedy, violence, reconciliation and redemption.”