Ever since Republican President Donald Trump took the oath of office to become the 45th President of the United States, the entire Democratic Party apparatus decided that the most effective way to  diminish Trump, was to sue him at every single turn.

As congressional Democrats continue mulling over ways file more lawsuits against the Trump administration, the George Soros-supported Center for Biological Diversity (CBD) has been the most prolific litigant against the administration.

The Center for Biological Diversity is so proud of their complaint-filing prowess, it has event placed an active tracker website to keeps tabs on how many times they have sued President Trump. To date, the CBD has filed 136 complaints against Trump.

Yes, 136 lawsuits against Trump by just this one group.

While the CBD is filing complaint after complaint all over the country, Florida appears to be a real focus.

It makes sense, Florida is the ultimate swing state during presidential elections, and 2020 is right around the corner.

CBD recently sued (3) government agencies, including the U.S. Army Corps of Engineers for their schedule nutrient-rich water releases from Lake Okeechobee into the surrounding waterways.

These releases have added to the toxic algae crisis communities along the Caloosahatchee and St. Lucie rivers and their estuaries.

U.S. Reps. Francis Rooney (R) and Brian Mast (R) represent these respective communities and have been “all hands-on deck” in the effort to eradicate the deadly algae that is causing significant damage to the area’s business community.

Both men have been pressuring the Army Corps of Engineers to limit the water releases, and were helpful in convincing President Trump to allocate more federal dollars to clean up the water mess in S. Florida.

Do both Francis and Mast support the CBD lawsuit?

We couldn’t reach Rep. Mast for comment about the recent CBD lawsuit against the Trump administration, but we did hear back from his office.

Mast’s Deputy Chief of Staff Brad Stewart responded, saying that Rep. Mast hasn’t had the opportunity to read over the lawsuit.

“He hasn’t had the chance to review the details of the lawsuit yet, but in general, these endangered species are frequently the proverbial canary in the coal mine for human health, so he definitely believes it’s something that the Corps needs to take into account,” said Stewart

Another organization that appears to be running parallel to CBD, but using more political, “boots-on-the-ground” methods against Republican politicians that are in some way connected to the Florida water issue is Bull Sugar.

Rep. Mast has been aligned with Trump agenda 92.4% of the time. According to the FiveThirtyFive website, Mast has been loyal to Trump and his 92.4% pro-Trump voting record proves it.

But with that said, why would Mast support these two groups that have an obvious agenda to disrupt and diminish the Trump administration?

Mast has not openly stated that he backs either of CBD or Bull Sugar, but this photo of him posing with two representatives of those groups speaks volumes. 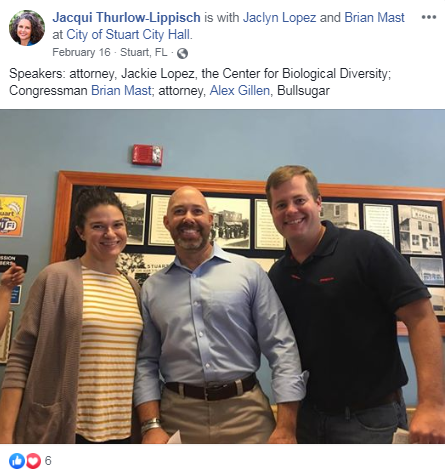 The picture was taken at a toxic algae town hall meeting in Stuart, Florida this past February.