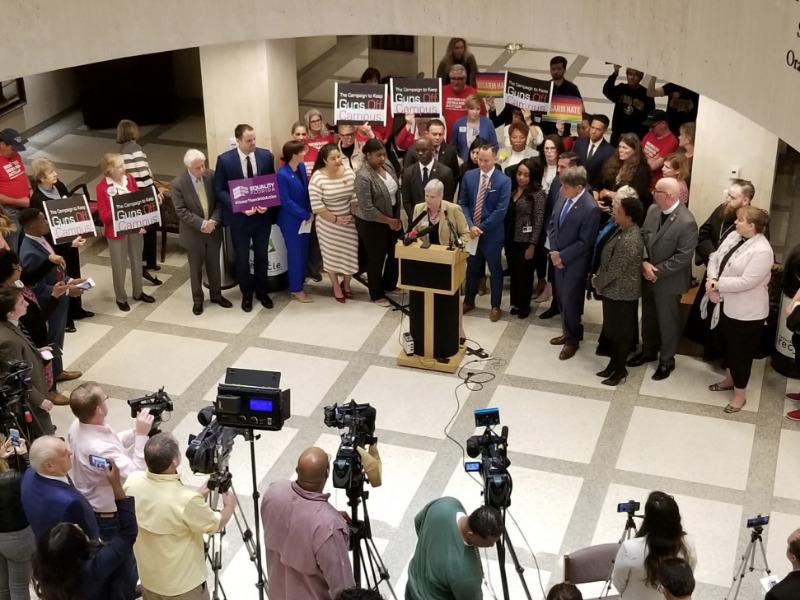 TALLAHASSEE — A Florida Senate panel tasked with shaping statewide education policies advanced a sweeping school-security package on Tuesday that would make it easier for school districts to participate in a controversial “guardian” program and would allow classroom teachers to be armed.

The Senate Education Committee approved the proposal (SPB 7030) with a 5-3 vote along party lines. The vote came after the panel agreed to amend the measure to allow law enforcement officers to serve as school safety specialists instead of requiring school district employees to fill that role. The revised bill also puts school superintendents in charge of appointing school “guardians.”

The changes came after Republicans on the committee swatted down a proposal by Sen. Lori Berman, D-Boynton Beach, that would have barred classroom teachers from carrying concealed weapons on school grounds.

“My eight grandchildren, and their generation, they deserve to have someone ready to protect them if they are available,” Sen. Dennis Baxley, R-Ocala, said. “I am asking you to understand that we want to empower those people who can do something, they are the only ones who will be there in a narrow amount of time to save those lives.”

While most of Tuesday’s two-hour debate focused on the contentious guardian program, the proposed package includes an overhaul of other school-safety measures.

Senate Education Committee Chairman Manny Diaz called the proposal “monumental” and said it was crafted to include most of the recommendations made in a 458-page report by the Marjory Stoneman Douglas Public Safety Commission.

The commission overwhelmingly favored expanding the “guardian” program and recommended strengthening school requirements to report crimes and other safety-related incidents, as well as sanctions for superintendents who under-report such incidents.

“One year ago this week, we made a commitment to the students and families of Parkland that we would do everything in our power to prevent such a tragedy from ever happening again. … So I am very pleased this critical school safety legislation gets to the heart of the commission recommendations,” Senate President Bill Galvano, R-Bradenton, said in a press release following Tuesday’s committee action.

But Sen. Bill Montford, a Tallahassee Democrat who is the CEO of the Florida Association of School Superintendents, questioned the policy of arming teachers.

Most members of the public who addressed the committee focused on lawmakers’ efforts to have more armed teachers in schools. Dozens of individuals — including several members of the gun-control advocacy group, Moms Demand Action — spoke against that part of the proposal.

Berman argued that the guardian program is less than a year old and that “there is no evidence that the program works.”

“We haven’t seen an instance where the guardian program has proven to be effective, so why are we expanding it?” she asked.

Diaz acknowledged there are no studies that show the guardian program has worked since it went into effect less than a year ago. But the Hialeah Republican he wants “to go with the work of the commission.”

“We had members in that commission who were totally opposed to any armed personnel and, after serving on this commission, they have come to us with this recommendation,” he said.

The proposal is still in its early drafting stages and will likely be reviewed by the Senate Appropriations Committee to iron out funding issues before it is ready for a full Senate vote, Diaz said.

Galvano’s office on Tuesday also said a separate piece of legislation, expected to be filed in the coming weeks, would seek to implement the commission’s recommendations about enhancing 911 emergency services’ duty to warn school districts when a threat is made.