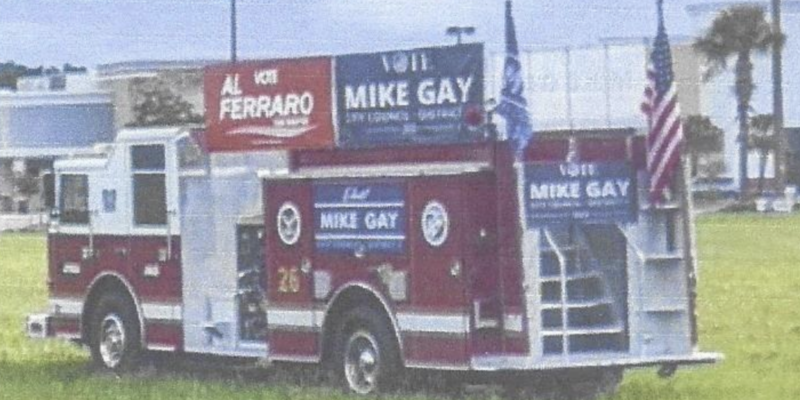 The upcoming city council and mayoral races in the City of Jacksonville are heating up and local city officials may be siding with one candidate over the other.

According to a source, a local towing company was contacted by City of Jacksonville administration and requested that the company tow the firetruck.

The towing company advised the administrator that there was no lawful reason to tow the truck.

In addition, the letter cited that Gay,” who owns 2 retired firetrucks and a military humvee, was not allowed display signage that represents certain organizations endorsing or supporting his candidacy.

Bowles came to her own conclusion that she verified his use of the acronyms JFRD and JSO,  and believes the signage had misled the public because those acronyms displayed on the aforementioned fire truck give the appearance of an endorsement.

Gay’s sign shows the “unofficial” insignia of the two groups in question.

Bowles also says that the city has confirmed that Gay has not received the endorsement from either the JSO or JFRD.

While the signage in question may not adhere to certain nit-picking requirements like exact dimensions, or how many campaign signs can be displayed at one location, Gay appears to be in compliance with state law.

First Coast News confirmed that it was perfectly legal for Gay to display his firetruck on private property, after receiving a question from an alleged concerned citizen.

In response to the letter from Bowles, Gay removed the firetruck and his signage from the private property where he was first given permission to do so, even though it is apparent that he had not violated any laws or ordinances. 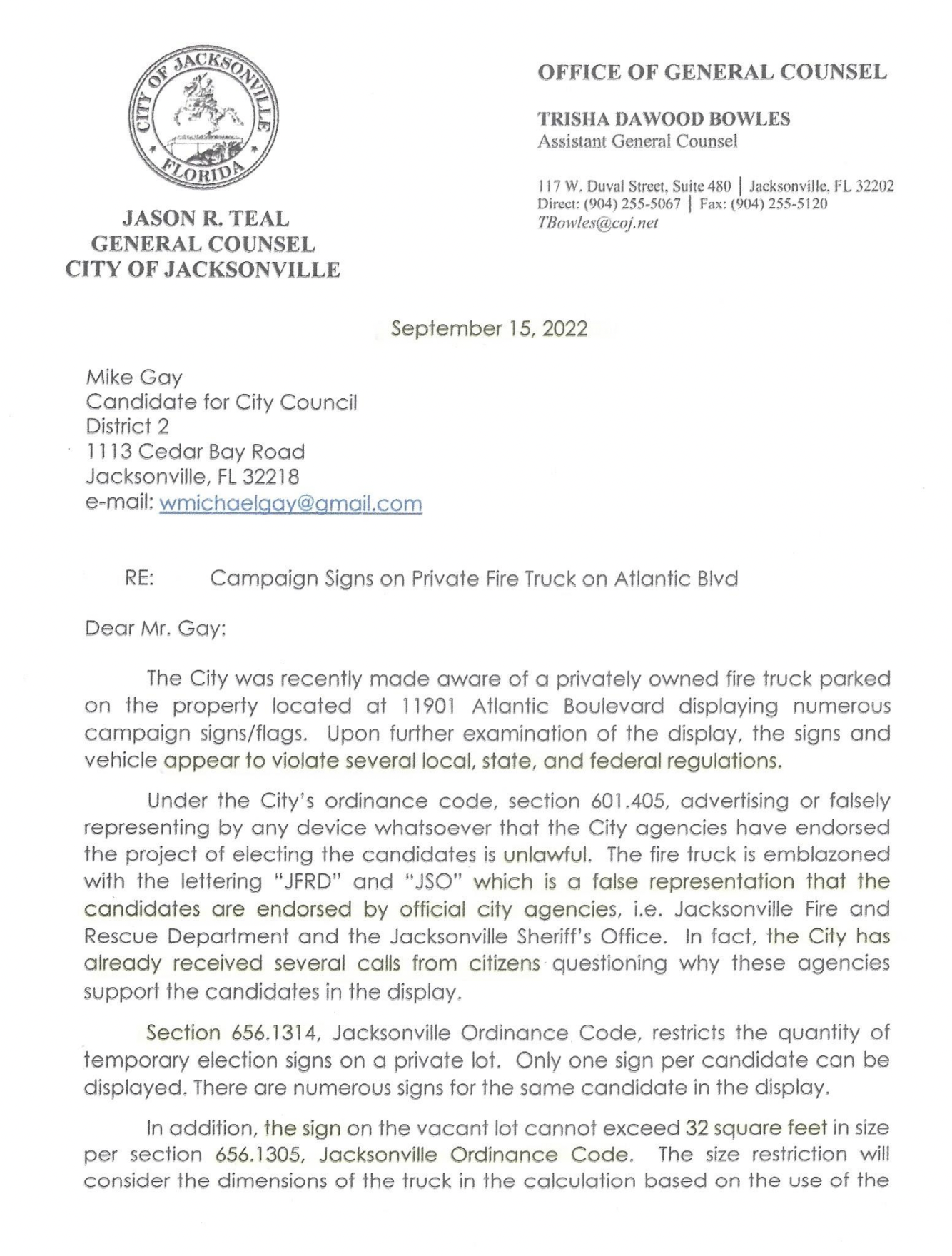 What are they hiding?

Gay, through his private counsel, submitted a Freedom of Information (FOI) request to Mr. Teal’s office for any and all documents pertaining to this issue, including all of the “confused calls from citizens” about whether the fire fighting agency had endorsed him.

The FOI request came back but there weren’t any citizen’s complaints attached, leaving doubt as to whether these citizen complaints actually occurred.

If citizen calls were made, there may not be a way to verify them.

The only communications that were furnished in the FOI request were text interactions between several of City of Jacksonville's political operatives and interested parties within Mayor Lenny Curry’s political sphere.

The Floridian could not confirm that Gay’s opponent in the race, Lindsey Brock, is being supported by individuals linked to  Mayor Curry, but on the surface, it appears that Brock may be benefitting from Curry’s influence in the city.

There is speculation that Gay’s firetruck and candidacy is not the reason for the the apparent outrage over the use of the truck and posted signage.

Mayoral candidate Al Ferraro, whose sign was also displayed on the firetruck, is rumored to be the real target.

It appears that Ferraro is not the candidate of choice of the current City of Jacksonville administration and political apparatus.