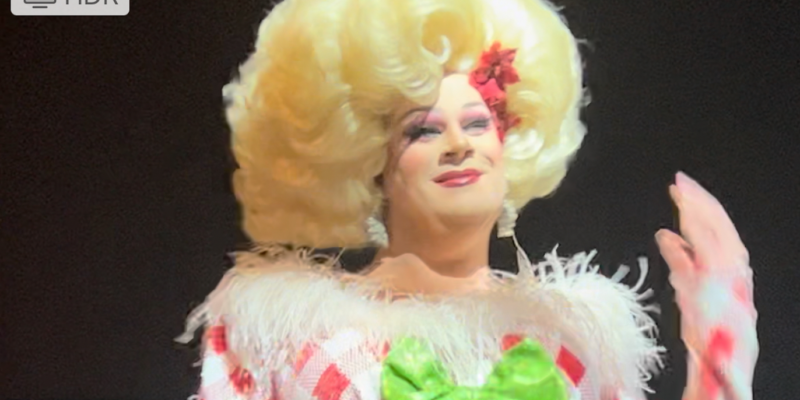 The controversial “A Drag Queen Christmas” performance, which allegedly violated Florida statute on December 26 by displaying “sexually explicit” acts to minors, followed up its Fort Lauderdale show date with a Miami event that also exposed a minor to the same sexually charged or sexualized program.

After Florida Governor Ron DeSantis announced that the Department of Business and Professional Regulation (DBPR) had formally begun to investigate the allegations that minors were exposed to inappropriate adult behavior during the Fort Lauderdale show, The Floridian attended the Miami event where we identified (4) individuals that appeared to be minor children accompanied by adults.

The Floridian was the first media outlet to report the alleged incident that was later reported on by Fox News.

As a steady stream of alcoholic beverages were being sold to patrons at the James L. Knight Center in Downtown Miami where the event was held, we could not confirm that three of the four apparent minors were underage, but did verify that the fourth was a 12-year-old girl from South Florida.

During the show’s intermission, we caught up with "DeAnne" and her 12-year-old daughter and asked them what they thought about the very funny drag show.

Both mom and daughter were happy to be there, and when we asked them what skit was their favorite, the “Screwdolph the Red-Nippled Reindeer” skit performed by Jimbo the Clown was by far their favorite.

DeAnne, who praised the actor as “amazing,” said that “nobody was expecting” to see that reindeer outfit, which had two large breasts with red lights shining through the nipples.

“I went to a drag show,” said the daughter when we asked her what she was going to tell her friends she did over Christmas break,

The daughter is currently in the 7th grade.

The show itself was very funny and entertaining, especially when the actors involved the audience, but should it have been marketed to "all ages" and allowed children to attend?

Here is our short interview with the mother and daughter:

The Floridian first reported that the traveling drag queen show that took place at the Broward Center for Performing Arts Center appears to have exposed minor children to simulated sexual acts.

Fans,” warning the company that if they allowed minor children to attend the “drag show” where alcohol was being served, their liquor license could face “strict penalties” including possible revocation of the license.

Here is the letter:

“It has come to the Department’s attention that you have contracted with Big Time Operator, LLC d/b/a “Drag

Fans” to offer the use of your licensed premises to conduct the “drag show” performance “A Drag Queen Christmas.” The Department has reason to believe that this drag show is of a sexual nature, involving theexposure or exhibition of sexual organs, simulated sexual activity, and/or the sexualization of children’s stories.

The Department has also become aware that drag shows by Drag Fans have been marketed to and attended by minors, including young children.

592 So. 2d 1145 (Fla. 2d DCA 1992). Accordingly, Florida’s licensure laws provide strict penalties for licensees who allow minors to attend these drag shows at their licensed premises. See sections 561.29(1)(a) and

561.29(1)(c), Florida Statutes. These penalties range up to and include revocation of the license pertaining to the licensed premises. Id. In short, if you allow children to attend the Drag Fans drag show at your facility, you

are putting your license in jeopardy.

To avoid action being taken against your license, it is your obligation to ensure that minors are prohibited from attending the Drag Fans drag show. If minors are allowed to attend this drag show, the Department will take any and all actions available to ensure that you do not pose a threat to minors in the future.”

During the show, several of the actors, including the host, Nina West (pictured), took subtle jabs at Gov. DeSantis but did not go any further than mentioning how DeSantis was unhappy with their acts.