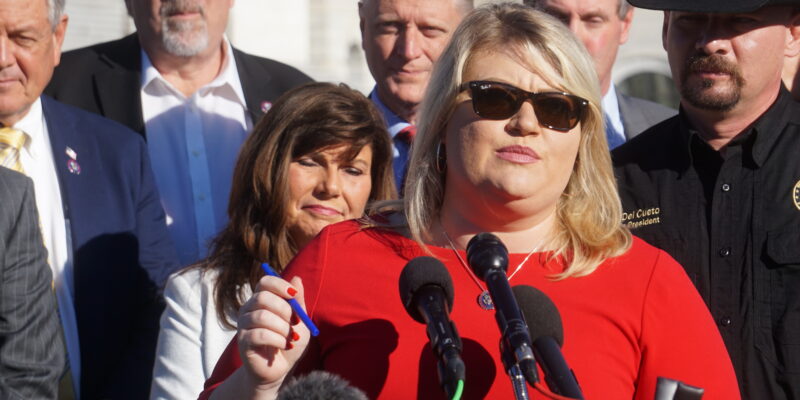 Florida Republicans continue to be among the most ardent opposition to the overall Biden agenda. The ongoing border crisis is of particular focus, with calls for Secretary of Homeland Security Alejandro Mayorkas to resign. Meanwhile, Rep. Kat Cammack (R-FL-3) has recently visited the border, and spoke with Julie Banderas on Fox's Faulker Focus about the experience.

"For the White House to call our trip to the border a “political stunt” shows their ignorance," she tweets, referring to comments White House Press Secretary Karine Jean-Pierre made in a recent press conference. Additionally, Cammack says "we’re there to address the drug trafficking, the human smuggling, and the gruesome crimes committed there every day because of this administration’s policies." She concludes by saying that "it's absurd."

For the White House to call our trip to the border a “political stunt” shows their ignorance. We’re there to address the drug trafficking, the human smuggling, and the gruesome crimes committed there every day because of this administration’s policies. It’s absurd. pic.twitter.com/gXHHygwqSC

Banderas begins the segment describing House GOP leader Kevin McCarthy's plans for the border. She says he intends to hold hearings "literally right there" on the border, "to force Democrats to go there." Cammack says that it is "absolutely absurd" for the White House to dismiss this as a "publicity stunt." This is because the administration "has done absolutely nothing but facilitate the trafficking of children and drugs across our southern border."

Moreover, she says the White House "doesn't have a plan," while rejecting those put forward by Republicans. "It's completely disingenuous," she elaborates, "that Democrats are saying, "oh, well, I think we can work together on a couple of these issues." However, Cammack insists that "we have tried. They have rejected every single attempt that we have put forward to secure the border, support our agents, to stop the trafficking of children, stop the flow of narcotics. They have done absolutely nothing."

Finally, Cammack says that "now, they're going to reap what they sow." She outlines that Republicans should be "very aggressive" in securing the border and aiding border patrol agents.

"Because they have not received one ounce of support from this administration," added Cammack

Banderas builds off of this last point Cammack makes, saying the border patrol's "morale is at an all-time low," while illegal crossing are at "an all-time high." More infamously, Mayorkas says under oath that not only is the border secure, but closed.