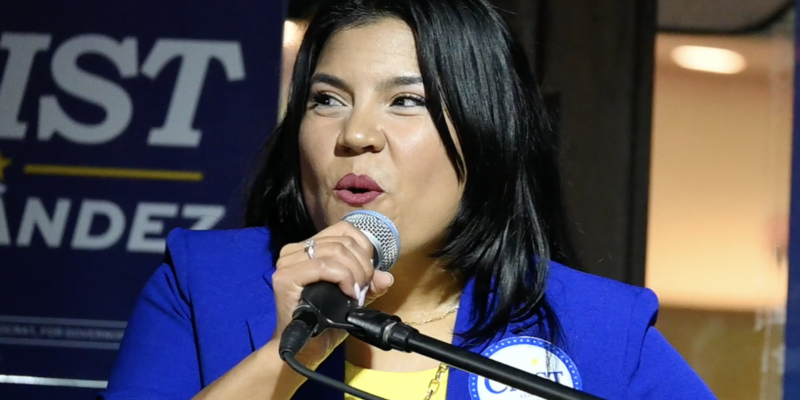 MIAMI—Shortly before Democratic gubernatorial nominee Charlie Crist took the stage to address 200 or so Pro-Choice supports at his rally in Little Havana, Lt. Governor pick Karla Hernandez-Mats slighted Gov. Ron DeSantis by saying that while he was afraid of “drag queens,” he still liked to “play dress up.”

“Here's the thing about the DeSantis. He's a fragile man.  He's scared. He’s scared of gay people. He’s scared of drag queens, which is kind of odd because he does like to play dress up in the Top Gun costume,” said Hernandez-Mats.

Hernandez-Mats' cross-dressing comment is in reference to Gov. DeSantis filing a complaint against a drag club in Miami where children were seen in the presence of drag queens performing “sexually explicit drag shows.”

As far as the "Top Gun costume" she mentions, well, that is in reference to a campaign ad where DeSantis spoofed the recently-released Top Gun motion picture sequel.

Did she just insinuate that @GovRonDeSantis likes to cross-dress?

“They actually had agents going to this place and effectively just gathering information, getting intelligence, seeing what’s going on,” said DeSantis. “And what they found was not only were there minors there — and these are sexually explicit drag shows — the bar had a children’s menu. And you think to yourself: ‘Give me a break, what’s going on?”

Shortly after Hernandez-Mats left the stage, Crist took the stage where he expressed his disappointment in DeSantis, telling his supporters that they “deserve” better.

Crist continued, stating that “Ron doesn’t care,” and that the Governor only cared about his “political future and running for president to try to be the Republican nominee in 2024.”