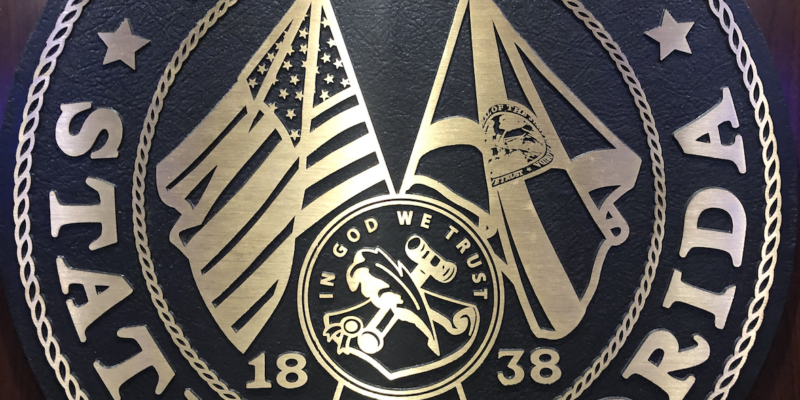 Most visitors to the Florida Senate, as well as legislators, legislative aides, Capitol Police, and media reporters, do not notice a long-standing and deliberate misuse of the letter 'O" on the official seal of the chamber.

What the heck are we talking about?

Well, if you look at the official Senate seal, you will see that the 'O' in "of" and in "Florida" is angled and not perpendicular as most letters are on every plaque, sign, or seal found around the State Capitol.

Upon coming across this anomaly in one of the Senate building elevators, The Floridian decided to investigate further. After scouring the Senate chamber and office building, we discovered that every single Senate seal can be found with the letter 'O' angled.

After speaking to no less than 3 reporters on the 5th floor, several legislative aides, and 4 Capitol Police officers, we decided to contact the Senate legislative offices for an explanation.

One Senate aide said that after the Senate Seal was changed to remove the Confederate flag back in 2016, the angled letter 'O' was left.

"We maintained the shape when the seal was updated in 2016. We researched the issue when we were working on the design options for the new seal, but the Senate had no record of why they were slanted in the original design," said the aide. We did consider straightening them in the new design, But ultimately the Senators decided to keep the original design for the exterior part of the seal."

There you have it. There isn't any record of why past legislators slanted the O's in the seal.

The Florida Senate was founded on May 26, 1845, and the Confederate flag was on the previous seal since 1972.(See Below)