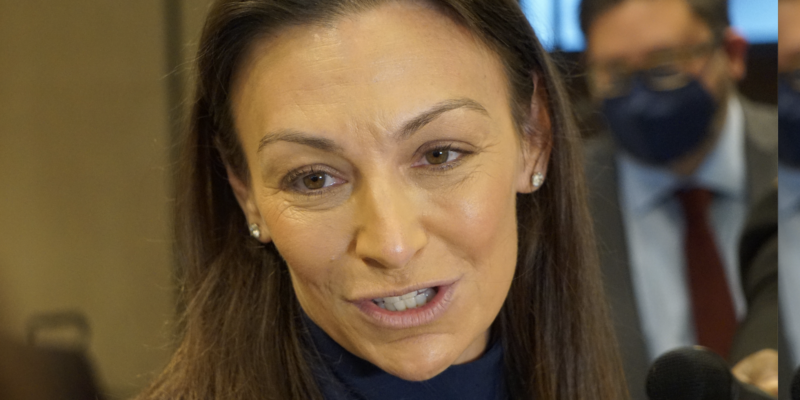 Tallahassee—In response to Florida Gov. Ron DeSantis’s State of the State address, Agriculture Commissioner Nikki Fried held a press conference to pan all of Gov. DeSantis talking points, especially his use of the terms “Freedom” and “the Free State of Florida,” which she refers to as a “dog whistle.”

Commissioner Fried said Gov. DeSantis used his “Ideological hit parade of fake conservatism” to appease his base of Republican support.

“He complains about “wokeism” while emoting dog whistle cues to his political base. He declared Florida a “free state” while he signs authoritarian edicts on businesses, schools and local governments,” added Commissioner Fried.

The Floridian spoke to Commissioner Fried where we asked her if she believed that the term “Free State of Florida” was in fact a dog whistle.

Fried, who says that she does not support mandates and bans,” believes Gov. DeSantis is actually oppressing the true meaning of freedom.

“What he has done is gone just the opposite direction. By him banning, that is the lack of freedom. And so when he goes and tries to rally this base, he is forgetting the most fundamentals, and that is the freedom of choice. And when he makes a statement about banning, whatever it is, that is a dog whistle to his community and talking about freedom,” added Fried.

DeSantis opened up his address by stating,” We have made Florida the freest state in these United States."

The remark did not sit well with other Democrats like Rep. Angie Nixon, who immediately tweeted,” he came out the gate reckless and divisive. smh”