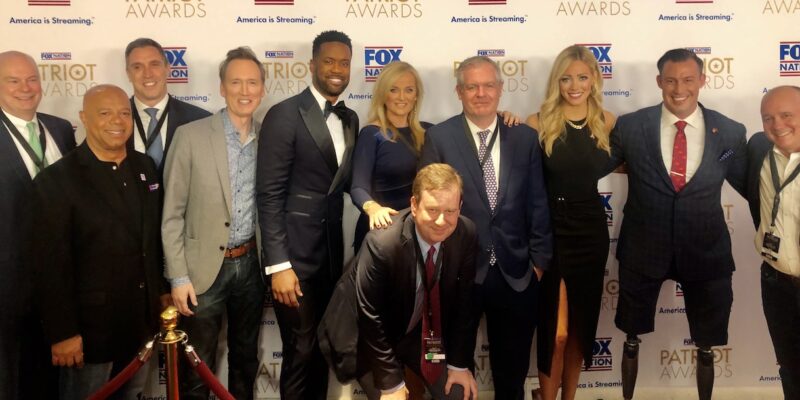 For about two hours this past Wednesday night, the FOX Nation descended on the Hard Rock Hotel in Hollywood, Florida, and also tuned in to watch their favorite TV personalities take to the stage during the 3rd annual Patriot Awards.

While there was a slew of touching, emotion-filled moments throughout the program, including Sean Hannity’s tribute to the late and great Rush Limbaugh, the show began and ended with a bang.

First, Florida Gov. Ron DeSantis made a surprise appearance and revved up the crowd of about 4,000. Attendees cheered on Gov. DeSantis and even broke out in the now-infamous “Let’s go Brandon” chant.

Interestingly enough, the very next morning, DeSantis signed anti-mandate bills into law in the community of, wait for it… wait for it… Brandon, Florida.

Laura Ingraham kicked off the show by presenting the “Most Valuable Patriot” award to Olympic gold medalist Tamyra Mensah-Stock.

An emotional Mensah-Stock expressed her love of country and thanked the nation for supporting her efforts during the last Olympiad.

“I was taught to love my country so I am here representing the USA – thank you guys so much for your support.  I wouldn’t be here without my faith, my family, or my friends. You guys have a beautiful night,” said Mensah-Stock.

To cap off the night, FOX Nation’s Nancy Grace presented the Back the Blue Award to Metropolitan Police officer Taylor Brandt for saving the lives of 9 individuals during her rookie year.

Officer Brandt, like the other award recipients, was humbled by the recognition and dedicated the award to all the police officers that took part in the January 6th Capitol riot

Outside of catching up with Webb and Benson prior to the show, we spoke to Brian Kilmeade during his book signing session at the end of the night, where the morning host expressed how much he was “ in awe” about the awards show, adding that now more than ever, “people are just thirsting to be patriotic again.”

“I couldn’t be more in aw the way they pulled it off. There’s nothing like it. It’s Pro-America. People are just thirsting to be patriotic again,” Kilmeade.

We couldn’t find Lawrence Jones, but that could have been because he may still have his own security detail and they probably had him all wrapped up.

Yes, it may be hard to believe, but at one point pre-COVID, Jones had a security detail trailing him at CPAC.

Even an amused Katie Pavlich couldn’t believe Jones had a detail, telling The Floridian,” What, Lawrence has a detail, really?”