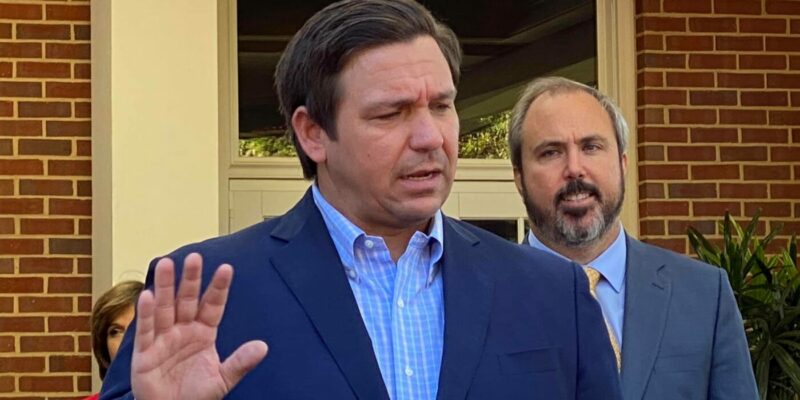 Shortly after being elected Chairman of the Republican Party of Florida (RPOF) on January 11, 2019, State Senator Joe Gruters appointed his close friend Richard Denapoli to chair the party's Grievance Committee on January 19, 2019, the same day a formal grievance was re-filed against DeNapoli.

The original grievance was filed against DeNapoli and three other Broward Republican Executive Committee members for allegedly breaking their loyalty oath, selling Republican emails for personal gain, and endorsing Democrats over Republicans was filed in September 2018.

Prior to Sen. Gruters assuming the chairmanship, former Chairman Blaise Ingoglia, a current state representative from Hernando County, decided to push off the grievance until after the 2018 midterm election, which was less than two months away.

Gruters, who is said to be close friends with and the accountant of Peter Schorsch, the  Progressive Daily Kos blogger and operator of the alleged pay-for-play Florida Politics blog, told several members of the committee to “dismiss” the grievances against DeNapoli and the other two individuals because DeNapoli “didn’t want them to go through,” said a source within the RPOF.

The source also said that because the grievance committee chairman had a complaint filed against him, the obvious conflict had to be "sorted out."

Gruters is said to have appointed someone else to write the “dismissal letters” for the grievance(s) because it would be improper for Chairman DeNapoli to write a letter dismissing a grievance against himself.

“Someone else had to sign the letters because of the conflict with the grievance chairman,” said the source.

Gruters' apparent support for DeNapoli runs deep. Both men got to know each other well when DeNapoli lived and ran for office in Gruter's home county of Sarasota.

Gruters and the “combative” DeNapoli were so close that, not only did Gruters order the grievance against DeNapoli squashed, he endorsed DeNapoli over another Republican candidate in his Broward countywide race for Republican State Committeeman.

DeNapoli recently invited both Gruters and RPOF Vice Chairman Christian Zeigler to attend a local event he and State Committeewoman Michelle Merrell put together back in July of this year.

Both men have praised their friend, the same friend who is alleged to have committed felony voter fraud in 2014 when he ran for public office.

“Richard DeNapoli's experience and dedication to the Republican Party is why I wholeheartedly endorse him for re-election as Broward Republican State Committeeman.  We have worked together for many years, and he is well regarded at the state party committee for his talent, skill, enthusiasm, and passion for the conservative cause and our Party,” said Sen. Gruters of DeNapoli.

"Richard DeNapoli is the hardest working grassroots Republican leader in Broward, with a long history of helping get Republicans elected in a very tough county.  I've enjoyed working with him on the state committee where he is highly respected,” said Vice Chairman Ziegler.

Back in 2011, Richard B. Davis, Chairman of Grievance Committee, characterized DeNapoli's leadership as "weak ineffectual divisive behavior in its leadership.”

Sen. Gruters nor Denapoli could be reached for comment.