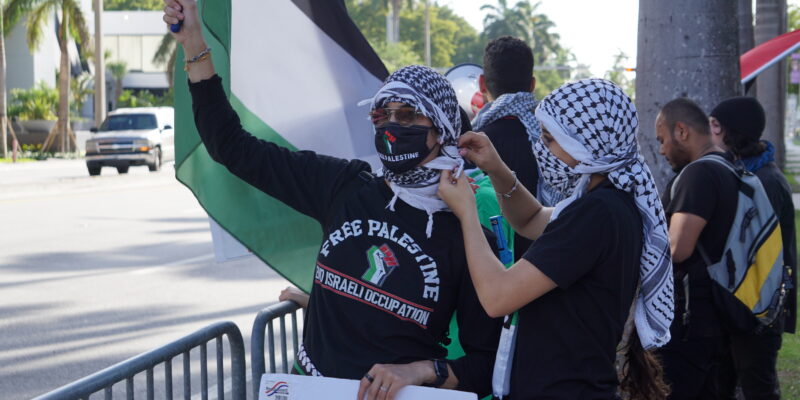 Fort Lauderdale— The Federal courthouse was once again the scene of another protest by Palestinian-Americans against Israel. And while the protest was peaceful, protesters chanted the anti-semitic “from the river to the sea” call-to-arms by Palestinian activists and the terror groups Hamas and Popular Front for the Liberation of Palestine (PFLP), which calls for the destruction of the State of Israel.

“No peace on stolen land. Justice is on demand. From the River to the Sea, Palestine Will Be Free. Gaza, Gaza don’t you cry, Palestine will never die. U.S. funding is a crime, killing babies in Palestine.”

The chant calls for the State of Palestine to be established from the Jordan River to the Mediterranean Sea, which would all but erase the State of Israel and all of its people.

Rep. Rashida Tlaib (D), one of two Muslim members of Congress, was excoriated for promoting the call-to-arms, and later deleted the tweet in which she promoted it.

“It’s nothing new that she’s an antisemitic person that seems to hate Israel,” Rep. Brian Mast (R) after learning about Rep. Tlaib’s tweet

In speaking to several of the protestors, who for the most part, were comprised of passionate individuals who were upset over the way they believe Israel has treated the Palestinians in the region.

“This oppression never stops. The protest is about the oppression in general,” said one masked Palestinian protestor.

On male protestor says that Palestinians and Palestinian-Americans support a two-state solution and want equal rights, believes that that recent ceasefire between Hamas and Israel “wasn’t enough and that Israel is “still an apartheid state.”

The young man said that Israel’s blaming of Hamas for terrorist attacks was just the Israeli’s covering up the crimes and “inhuman atrocities” they are committing and that those Hamas rocket attacks “will never reach them (Israel).”

“Every time they bring up Hamas, that’s a decoy,” he said “That’s them trying to take away from their own crimes and the inhuman atrocities they are committing on the daily.”

He added,” Israel has a superpower government. Hamas and all of their attacks will never reach them because of the superpower that they are.”

“Hamas fires their rockets knowing that none will reach them and harm them as much as they do, look at the numbers,” he concluded.

All of the young Palestinian-American and other Middle Eastern protestors we spoke to say that Palestinians want to live in peace, but the Palestinian governing body, the Palestinian Authority led by President Mahmoud Abbas, ordered that the surviving family of a Palestinian terrorist that killed two Israelis be paid $42,000 and given a new house.