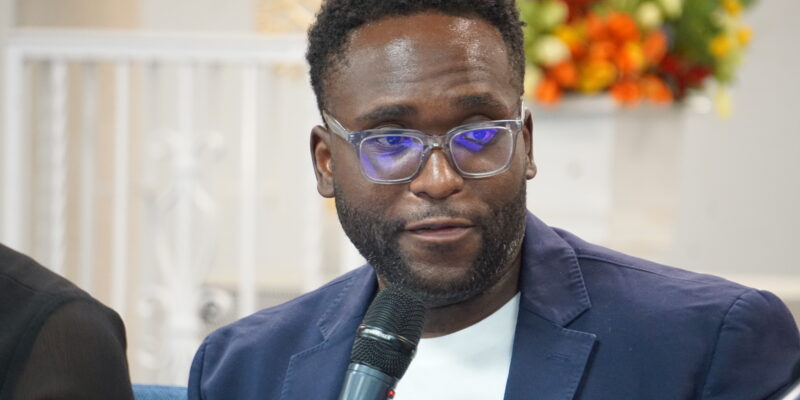 Being arguably one of the best-dressed and most visible legislators in the Florida legislature along with Sen. Jason Pizzo (D) and Rep. Carlos Guillermo Smith (D), State Senator Shevrin "Shev" Jones (D) is known to many as a simply man of Dios. That's a little Spanglish for,  a man of God.

Rooted in strong family values and spirituality, Sen. Jones sashays around Tallahassee as if he was the Prince of Zamunda with a reputation of being very approachable and easy to work with, at least that is what he paid me to write. I'm Kidding, of course.

We recently had the privilege of meeting momma and poppa Jones at one of Sen. Jones' legislative district meetings. Let me just say, the apple doesn't fall far from the tree. Jones is the spitting image of his pops, only pop dresses sharper and looks younger. Oh!

Soul brother Jones hates sports, but if you twist his arm a bit, he'll root for the Miami Dolphins, but only if you let him hold the remote, and only if you sit and watch Eddie Murphy in Coming to America.

We are still trying to figure out if the paper bag Jones had crumbled up on the passenger seat of his car was from McDonald's or McDowell's.

Children: No kids - #DogDad to Titos


Policy Goal(s): To represent the most marginalized in a way that they see me as an advocate for them and not a politician.

Dream Job: Wherever I have the opportunity to serve people.

Favorite Quote: “I will not die the man that could have been, but never was.”

Favorite Sport/Team: I hate sports, but if you are going to twist my arms, the Miami Dolphins

What is your family’s constant complaint about you?: I won’t rest!

In your words, how would you describe the U.S. Congress/State Legislature/ Executive Office?: Too polarized

What is something funny/embarrassing that has happened to you?: I gave the wrong speech to a group of 11th graders back in 2017.

Tell us more about yourself, anything: My parents raised my brothers and I to be respectful to people, to always keep a smile on our face, no matter the circumstance, and to look at every mistake as an opportunity. It’s the golden rule that I believe in with my whole heart.