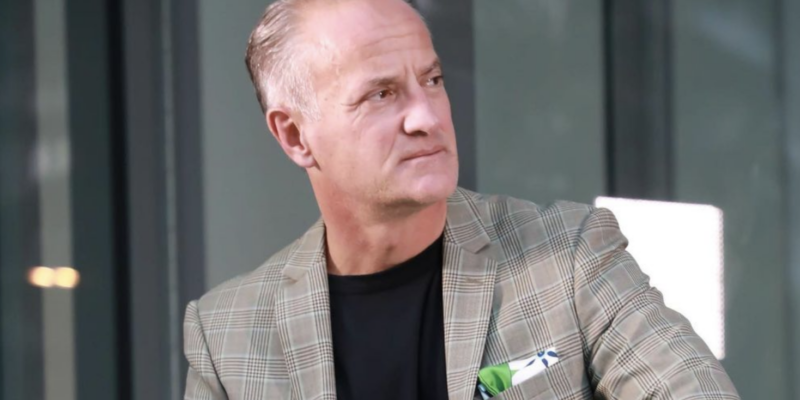 Florida Democrats appear to continue unraveling after their stunning 2020 statewide losses to Republicans and have now begun to turn on their own.

The Miami-Dade Democratic Party has announced that they have censured fellow Democrat and Miami Beach Commissioner Ricky Arriola for being a racist, and over his alleged amplification of “unproven COVID-19 treatments,” his pushing of herd immunity, his advocating for the jailing Dr. Fauci, and after he “compared the treasonous Capitol insurrection to the Black Lives Matter human rights movement.”

Miami Democrats have gone as far as to disavow Arriola’s “relationship to the DEC” and have barred him from “appointed membership or leadership within the DEC until such time as a majority of the DEC sees fit to lift the bar.”

The group added that Arriola needed to resign:

"The Miami-Dade Democratic Executive Committee has a responsibility to act for the material well-being of the residents of Miami-Dade and to espouse and defend Democratic values. Commissioner Arriola’s public conduct in engaging with critics has been wholly unbecoming of an elected official, and he has demonstrated that his views are dangerous to the community he represents. The DEC calls on Commissioner Arriola to resign from his post as Miami Beach Commissioner."

“I want to be clear about the values of the Miami-Dade Democratic Party,” stated DEC Chairman Steve Simeonidis. We are an inclusive, big tent community that can disagree on the best way to help working-class people, but this isn't a policy disagreement. There is absolutely no room under our tent for the dangerous disinformation and racist rhetoric being peddled by Commissioner Arriola. One of the many differences between us and the opposition is that we hold our members to account when they cross the line. And make no mistake, Mr. Arriola has long since blown past the line.”

In looking at the evidence presented against Arriola, especially when referring to him as an anti-Semite, that allegation is baseless. 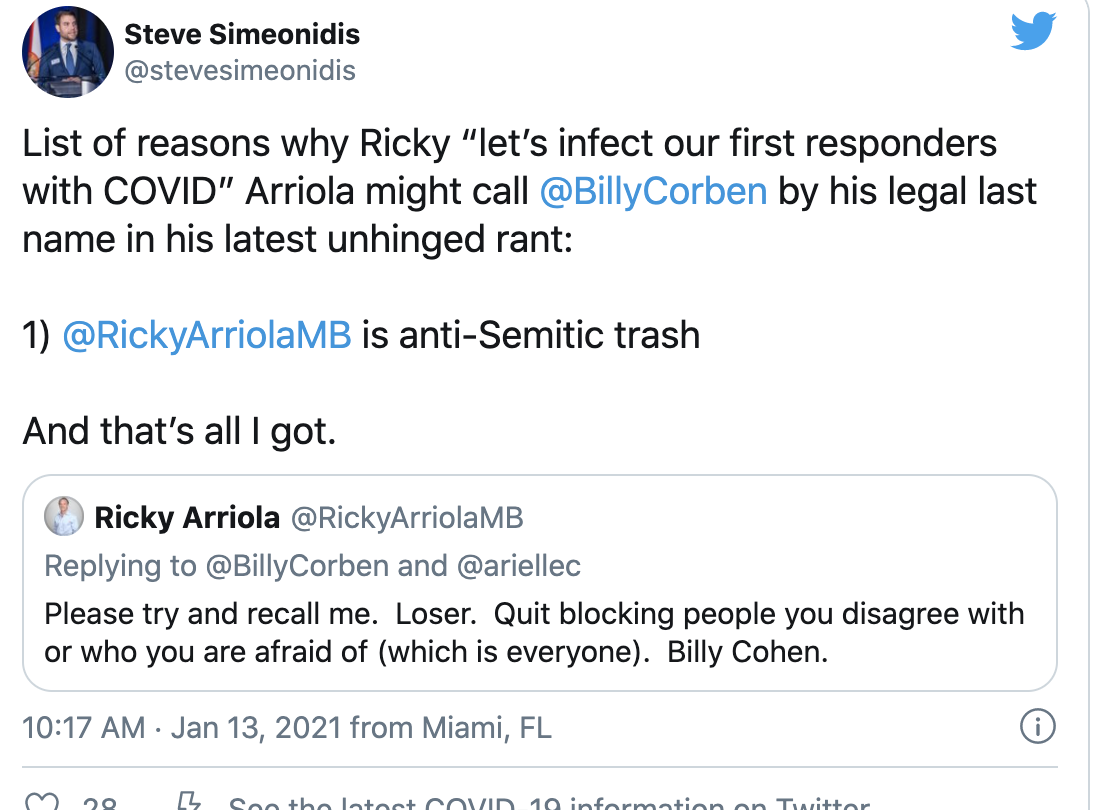 “Please try and recall me. Loser. Quit blocking people you disagree with or who you are afraid of (which is everyone). Billy Cohen,” tweeted Arriola.

According to Public records, Bill Corben’s birth name is William Cohen.  Arriola pointed that out in a tweet.

Arriola has opposed government shutdowns, and while Democrats across the state and the country have called for extended lockdowns or shutdowns of American cities and states to deal with the spreading pandemic, the Biden administration, and some major American cities have eased COVID restrictions.

But what is a little unsettling with the censure is that Simeonidis and Miami Democrats are targeting Arriola for his rhetoric and believe (what happened to being “an inclusive, big tent community” political party?) that his Twitter retorts against Corben are uncalled for, yet do not call out Corben for his “juvenile” and vile remarks, especially when he states,” maybe after I’m done with your mom.” 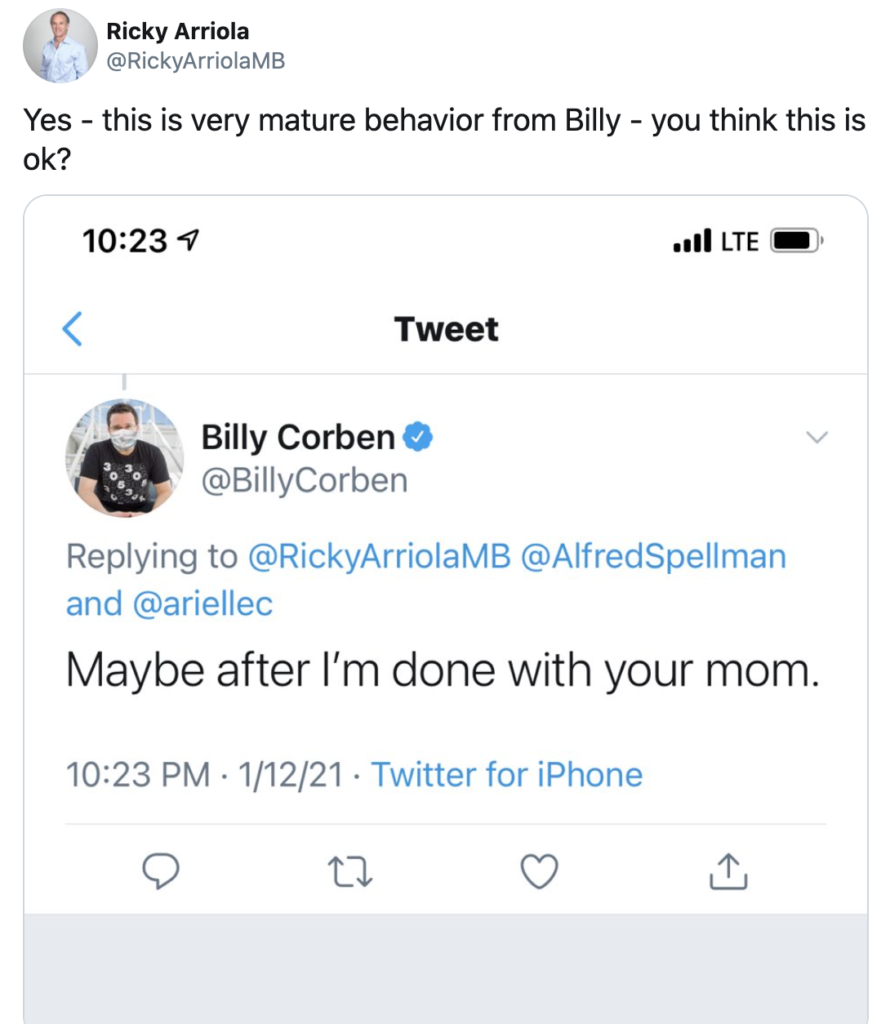 Corben’s response to Arriola is a clear threat of sexual assault or rape against his mom.

The Floridian reached out to Simeonides for comment and asked him via Twitter Direct Message if Corben’s remarks should also be disavowed.

Simeonides has not responded to our request for comments. 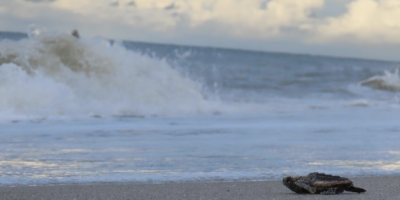 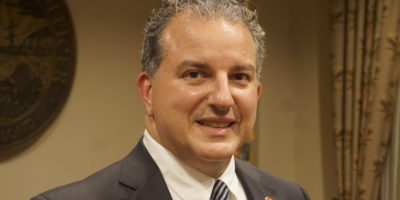 Patronis ready for reelection, says he won't 'shy away' from his loyalty to Trump