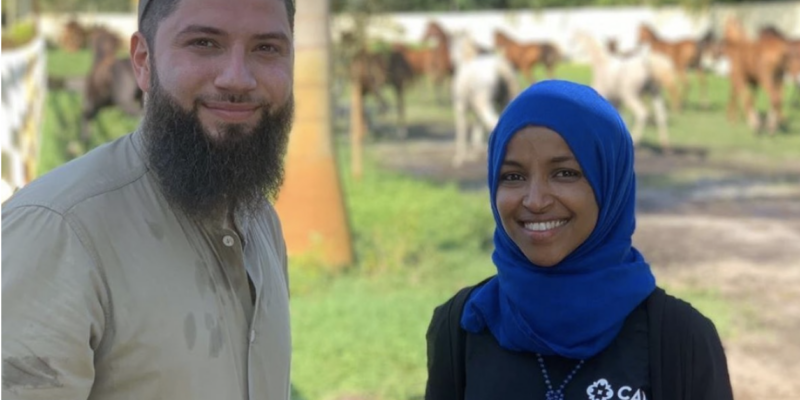 Former Executive Director of the Council for American Islamic Relations (CAIR) in Florida, Hassan Shibly (pictured) has literally taken what the Qur’an says about beating your wife and applied it to his own family.

Verse 4:34 in the Qu’ran allows for Muslim men to “strike” their wives, and that is exactly what Hassan Shibly did to his wife Imane Sadrati, who has accused him in a fundraising video of beating her in front of her children, causing her living situation with Shibly as “unbearable.”

“My children and I are in desperate need of your help,” stated Sadrati. “For years I’ve been in an abusive relationship, and the situation at home has become unbearable. I’ve finally decided to build the courage to start over.”

This is the same Syria-born Shibly that hosted Rep. Ilhan Omar at a CAIR fundraiser in California, where he infamously stated, “some people did something” about the 9/11 Islamic terrorist attacks against the U.S.

According to Frontpage Magazine’s Joe Kauffman, CAIR is nothing but a group that is rooting in Islamic terrorism, and Shibly is a devout Islamists that defended the “ISIS bride”, has called the terror group Hezbollah a “resistance movement,” tweeted that “Israel and its supporters are enemies of God,” and praised Palestinian terrorist Marvan Barghouti as a “hero.”

In addition, Hassan Shibly for the last two years has engaged in a high-profile spat with Conservative journalist and former Republican nominee for Congress, Laura Loomer.

Shibly tweeted out his disdain for Loomer, but now it appears as if Loomer has gotten the last laugh. Loomer has been a leading critic of the support for Shariah Law. 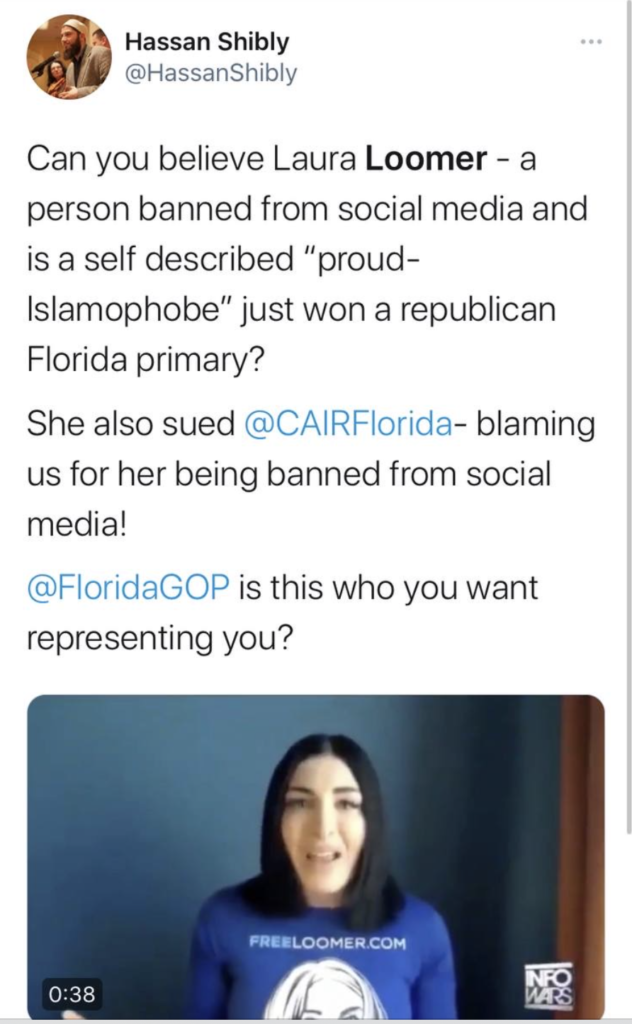 Loomer sued Hassan Shibly and CAIR FL in a Florida court for tortious interference for their role in getting her banned from Twitter and other social media sites.

In a statement to The Floridian, Loomer stated that she had long sounded the alarm about Shibly.

His wife said the abuse has been ongoing for years in front of their three children,” added Loomer. “This type of toxic masculinity is unacceptable in society, and within the Florida Bar. I will be filing a complaint with the Florida Bar against Hassan Shibly, encouraging his disbarment.

Men are in charge of women by [right of] what Allah has given one over the other and what they spend [for maintenance] from their wealth. So righteous women are devoutly obedient, guarding in [the husband’s] absence what Allah would have them, guard.

But those [wives] from whom you fear arrogance - [first] advise them; [then if they persist], forsake them in bed; and [finally], strike them. But if they obey you [once more], seek no means against them. Indeed, Allah is ever Exalted and Grand.-Qu’ran (4:34)

“It’s ironic how for years, Shibly has pretended to have the moral high ground by slandering others like myself with the term “islamophobia”, saying I’m not qualified to run for office. What I can’t believe Is that a sharia compliant Muslim man who beats his wife is allowed to practice law in America. CAIR is a terrorist organization and as Shibly has proven, their sharia compliant employees are dangerous individuals who hold values that are contrary to the values in the constitution.”

Rubio will not vote to convict President Trump