***UPDATE- CBS12 has taken down the Election Results posting.

Early voting has just ended in Florida and election day is on Tuesday, August 18th, but that hasn’t stopped CBS12 in Palm Beach County, Florida from posting their election results in the 2020 primary election.

President Donald Trump and Republicans have warned of voter fraud and voter suppression in the 2020 presidential election, so could CBS12 pre-election day, election results be a sampling of what is to come in the coming months?

How can CBS12 be reporting the election results before election day? Or better yet, why is CBS12 reporting 100% precincts reporting 48 hours before the polls even open.

Here is a screengrab of CBS12’s election day results page on their website: 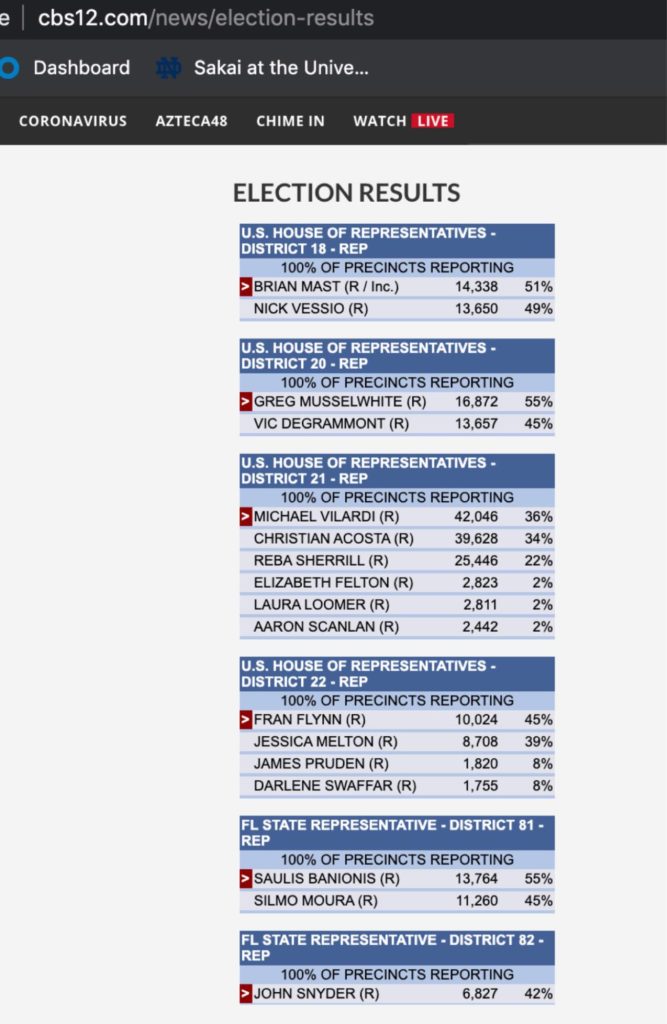 Regardless of how they came up with these random and "fake" vote counts, the existence of the results and their listing on the CBS12’s news website is troubling, especially when they state that results are indicative of "100% OF PRECINCTS REPORTING."

How can any of the precincts be reporting considering that they haven't even opened up yet, and technically speaking, it's against election laws in Florida for any of the ballots be open before election day?

The Floridian attempted several times to reach the news station for comment but the phone lines were occupied.

These results could make thousands of Republican and Democratic voters feel as if their vote will not count, and prevent them from voting this coming Tuesday.

In other words,  CBS12’s posting of the election results is tantamount to voter suppression in President Donald Trump’s very own backyard.

Conservative journalist and congressional candidate Laura Loomer was first to notice the "fake" election results and alerted The Floridian about what she calls "blatant voter suppression and vote tampering by a major news outlet in Palm Beach County." Loomer posted on her Parler account her interaction with CBS12, stating that the news desk refused to take down the "fake election results.”

“CBS12, one of the major local news stations here in Palm Beach County where I’m running for Congress is actively engaging in VOTER SUPPRESSION on their website by posting fake election results!

The election is on August 18th! Today is August 16th, yet CBS12’s website claims to have 100% reporting of all precinct votes!

My campaign contacted the station tonight and explained how this is voter suppression, we requested for them to take it down, and they are REFUSING to do so.

Call CBS12’s news desk ASAP and ask them why they are posting fake election results to suppress voters ahead of the August 18th Florida Primary election!

According to Loomer, hundreds of her followers have called into the news station only to be ignored.

Loomer campaign spoke to a guy named “Kyle” who said he was the digital weekend producer in charge of operating the news desk. He refused to give his last name and confirmed that he spoke to the news director named John Brady who he said was fully aware and informed of the fake election results and the crisis situation, but John Brady made the decision to refuse to speak to the Loomer campaign, and also refused to take down the fake election results after he was asked to do so, suggesting that the news Director was completely ok with the voters of Palm Beach county having their votes suppressed by fake election results that have been posted 48 hours before Election Day.