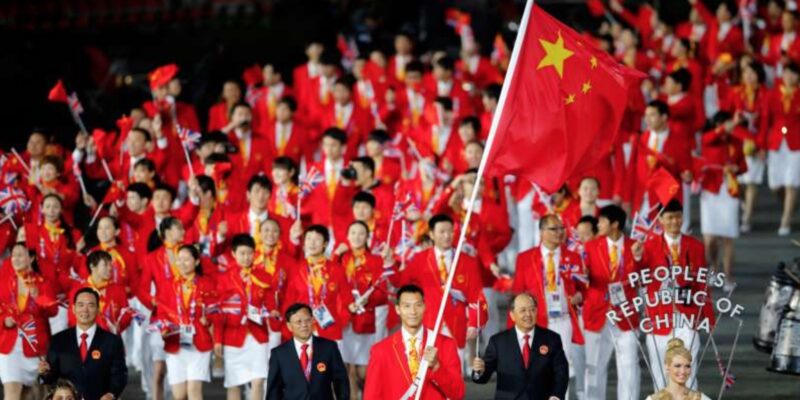 I recently sat down for dinner with my husband who is a firefighter. He had just finished another long 24 hour shift, which has been consistent in the first responder community since the beginning of the COVD-19 outbreak. We happened upon the topic of the Olympics and how we both loved cheering on the United States as the world’s greatest athletes compete. In the midst of the COVID-19 pandemic and stay at home orders, it was nice to talk about something other than the day’s news. We Googled where the next winter olympics were, as my husband’s favorite sport to watch, curling, is a winter sport. We were disappointed to learn the 2022 Winter Olympics will be played in Beijing, China. Our disappointment quickly turned into fury and anger.

Personally, I have been continually outraged by China’s actions around the world over the past couple of decades. As Chairman of the United States House Foreign Affairs Subcommittee on Asia, the Pacific and Nonproliferation, Rep. Ted Yoho was tasked with the issues and fallout of Chinese communist policy and aggression. As Rep. Yoho’s former Deputy Chief of Staff, I had a front row seat to world affairs and the Chinese government’s march across the world stage with an authoritarian boot.

For years, the Chinese have engaged in predatory loan practices with third world countries as an attempt to leverage influence in emerging regions and economies with a total disregard for these countries’ well-being and its citizens. The Chinese government has thrown more than one million Muslim Chinese citizens in concentration camps and routinley jail, torture, and muder political prisoners. The Chinese military has created man-made islands in the South China Sea to extend Chinese influence into international waters with no respect for international maritime laws and boundaries.

They continuously abuse and manipulate international laws, agreements, and American intellectual and industrial property. According to Stanford Law Professor Paul Goldstein, the theft of American Intellectual property by China costs the United States as much as $600 billion dollars annually. That alone needs to serve as a warning of the staggering costs of engaging in a relationship with China to American innovators and entrepreneurs.

Fast forward to today and the COVID-19 pandemic that has swept through the world as a plague with no end in sight. Lockdowns, quarantines, social distancing, and unnecessary American deaths because the Chinese government tried to cover it up. The Chinese government, along with their cohorts at the WHO, are clearly responsible for the global pandemic that has tanked markets globally and taken precious lives. Their efforts to deny accurate reporting, silence whistleblowers, and manipulate critical data are just another sign that they cannot and should not be trusted.

They continue to deceive the international community and refuse to share scientific and health data that could save lives. If this crisis has given us anything, it has revealed the dangers that outsourcing critical American industries has on our way of life. Americans are and will continue to be negatively affected by subpar foreign regulatory standards and cheap labor practices.

There are great dangers in the United States not having enough control over its supply chains, manufacturing, and trade. It puts our national security at risk when countries like Communist China have such a stranglehold over our economy and therefore, our ability to access resources and products. It is time to bring manufacturing back to the United States and ensure our supply chains can deliver quality medical equipment to our brave doctors, nurses and first responders on the frontlines.

But beyond reinforcing our supply chain, it is imperative that we do not reward China by allowing them to host the 2022 Winter Olympics. Hosting the Olympics is a great honor. It offers the host country the opportunity to showcase its greatest and most unique cultural, historical, and athletic assets that set it apart from the world. People from across the globe travel to the Olympics to watch their country’s athletes compete against those of other countries, while bolstering the host country’s economy.

The Olympics has long been a healthy competition between highly trained and accomplished athletes. The rules governing the sports are strict and clear with athletes expected to follow them. It is a fair fight. The way the communist Chinese government has treated the United States and countries across the world has not been a fair fight. The Chinese have cheated, stolen information, deceived the international community and their own people, and manipulated their way to the global stage.

There is an opportunity to fill a void in world leadership. America must lead the way for fairness and accountability. I believe that the United States Olympic committee should lead a delegation effort demanding that Beijing forfeit their hosting of the 2022 Winter Olympics. I call upon other nations to join the United States in holding the Chinese Government and by extension, the Chinese Olympic committee accountable for their egregious actions.

The motto of the Olympics is ‘hendiatris Citius, Altius, Fortius’ meaning faster, higher, stronger. The world must move faster to hold China accountable for its cheating and human rights abuses. The United States can lead a charge to champion a higher set of morals and ideals. And finally, we collectively must set a stronger benchmark that defines basic human rights and liberty. The Olympics and sports in general is a perfect way to bring people together under a common cause. Let that cause be freedom, human decency and mutual respect. Certainly, the Chinese government has demonstrated they are not capable of such.

Kat Cammack, a Republican candidate for U.S. Congress in FL-03 is a small business owner, a proud wife to a first responder, an alumnus of the United States Naval War College, and the longtime former Deputy Chief of Staff and Campaign Manager to retiring Congressman Ted Yoho (R, FL-03).