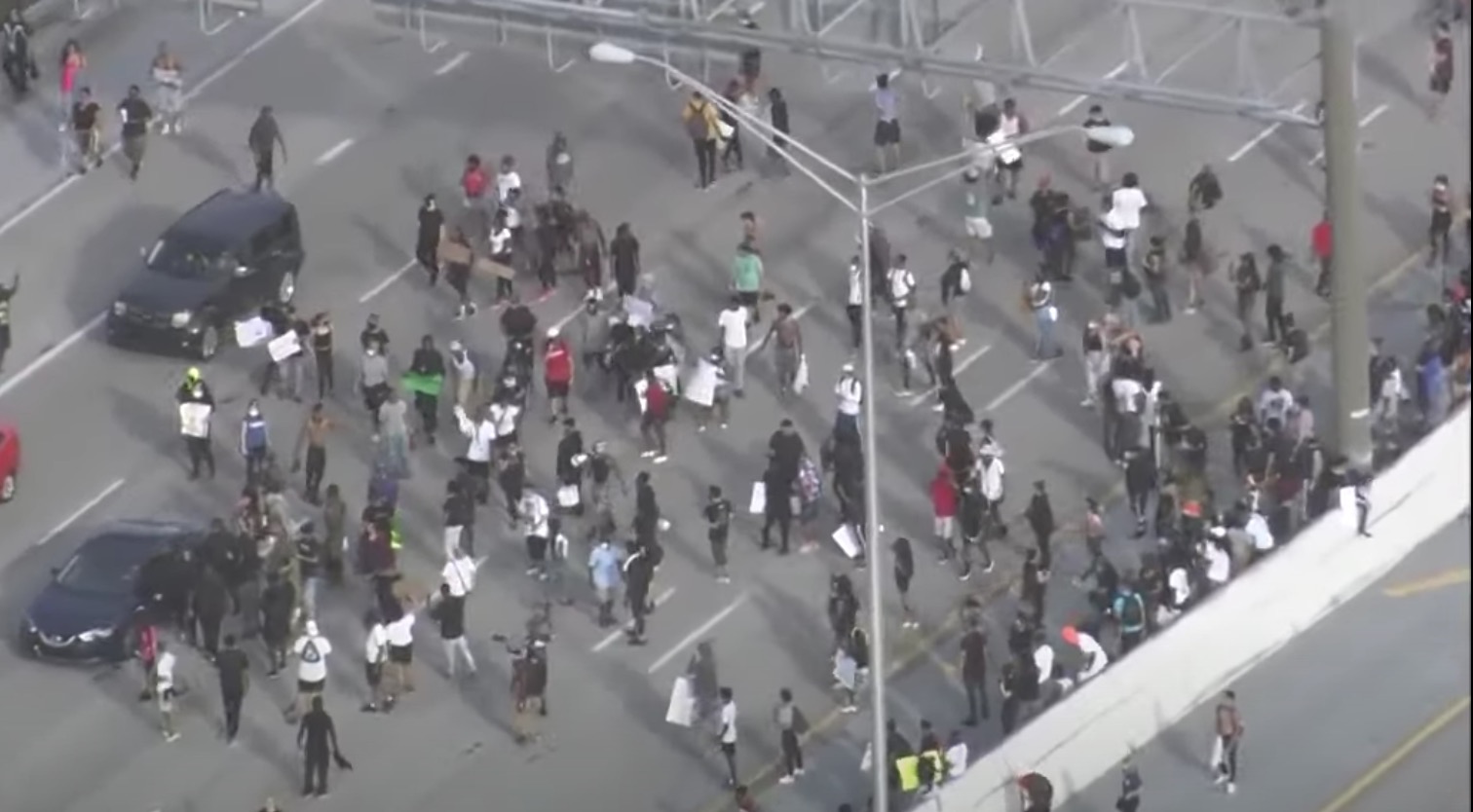 As racially-motivated riots continued to sprout up across the country in response to the death of George Floyd at the hands of one over-zealous police officer in Minneapolis, Minnesota, many members of Congress have refrained, perhaps refused to condemn the looting and violent riots that continue to take place.

Over this past weekend in Florida, riots broke out in Miami, Fort Lauderdale, and West Palm Beach, resulting in widespread damage to property and leading to dozens of arrests.

According to the Palm Beach Post,  a protest that broke out in West Palm Beach, which shut down Interstate 95, and eventually moved to the north and turned into a full-fledged riot as one vehicle was burned, both a Target and Best Buy retail stores were damaged, and shots fired, according to Police.

Florida Rep. Lois Frankel (D), who represents just about the entire county of Palm Beach, tweeted a “thank you” to protestors just a few hours after those protestors faced-off with police in downtown West Palm Beach and shut down the highway.

“Thank you to the protesters and West Palm Beach Police for peaceful interaction this afternoon,” stated Rep. Frankel “Please continue to show the nation it can be done. Mr. Floyd, his family, and our country deserve justice, not violence.”

Thank you to the protesters and West Palm Beach Police for peaceful interaction this afternoon. Please continue to show the nation it can be done. Mr. Floyd, his family, and our country deserve justice not violence.

Rep. Frankel, like many Democratic members of the U.S. Congress, has yet to openly condemned the violence and loss of property that has resulted from the riots across the country.

Frankel’s Republican congressional opponent, Conservative journalist and activist Laura Loomer responded to The Floridian’s request for comment over Frankel’s tweet, and questioned how the domestic terrorist organization ANTIFA and Black Lives Matter threats to burn structures in Palm Beach County and shut down the highway were “peaceful actions.”

“Looting, shutting down I-95, threatening to set businesses on fire, burning cars, spray painting businesses and planning riots on social media within the district are all “peaceful actions” according to Lois Frankel? It is shocking and highly questionable  to see Lois Frankel thank the rioters in Palm Beach when it was widely reported today that ANTIFA and BLM members stormed I-95, blocking traffic, creating a very dangerous situation for first responders and residents of District 21 and Palm Beach County,” stated Loomer “Her tweet was posted hours after an emergency public safety alert was issued that warned the public about dangerous and illegal protests on I-95 in oncoming traffic in both the Southbound and Northbound lanes from Palm Beach Lakes to Southern Blvd.”

Loomer also demanded that Frankel “immediately condemn “ANTIFA and all violent protests and express support for police officers who are risking their lives to maintain law and order in the district.”

“What part of any of this is “peaceful?”- Laura Loomer

We looked into Loomer’s claim that  ANTIFA and Black Lives Matter advertised a riot and have been able to confirm that the groups put out a call to arms on Saturday. 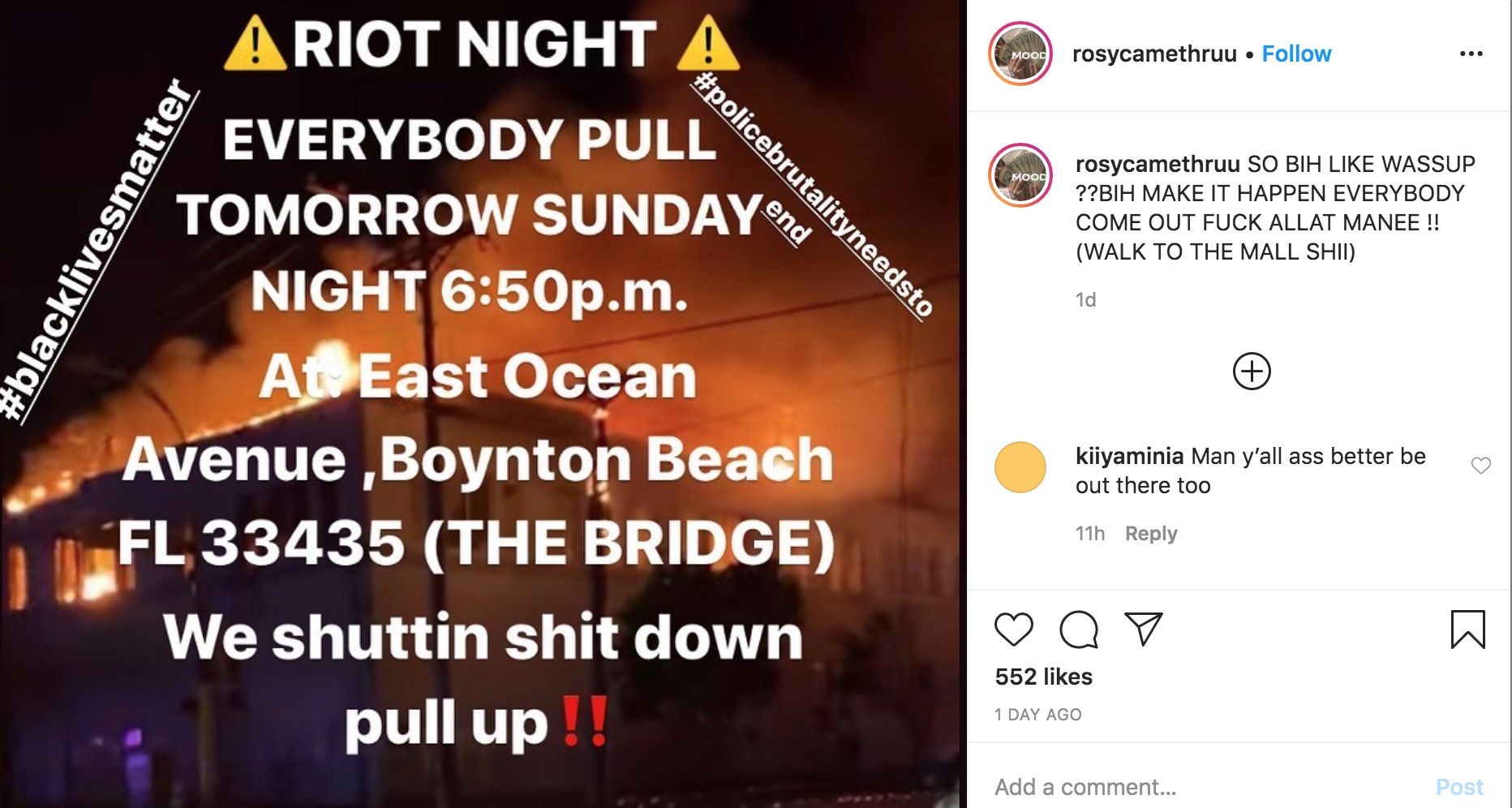 Loomer also called out Frankel on her Parler social media account for not denouncing “ANTIFA and BLM terrorists,” calling her a “radical Democrat” for not speaking out against the “ANTIFA terrorists threatening to riot in the district.”

Earlier on Sunday, President Donald Trump tweeted that his administration was going to designate ANTIFA as a terrorist organization.

** Update– Both Fire and Police Departments in West Palm Beach have told their rank and file that because of the this past weekend’s riots, more unrest is expected in the coming days.