Florida Rep. Brian Mast (R) has really stirred the pot with farmers in Florida after he penned a scathing op-ed directed against U.S. Sugar and it’s associated farming community. The opinion accuses farmers of wanting to “steal” water from Floridians for their own profit.

“Facts be damned, U.S. Sugar’s primary goal for their latest water heist is clear: to reserve Florida’s water for themselves alone. Instead of looking at Florida’s needs today — based on science, population and public health — U.S. Sugar wants to lock in the water supply numbers from over two decades ago,” stated Mast. “To them, it does not matter if that prevents water from reaching your home, the Everglades, Florida Bay or wherever else it is needed, and to them, it also does not matter if it causes toxic discharges to Florida’s beaches and coasts.

If that seems reasonable, you may be asking: what’s the problem? U.S. Sugar wants your water — every other piece of the system be damned — and they’ve enlisted Congress to steal it for them. Using the coronavirus pandemic as cover, they are hoping nobody will notice that they’ve seized this moment to try again to hijack Florida’s water for their own profit. If they succeed, it will mean more discharges from Lake Okeechobee, more toxic algal blooms in our estuaries, and less clean water for the Everglades. No Floridian should accept this.

But just as his op-ed published, farmers began to react to the Mast’s posting, forcing him to respond to the allegation against him that he and the Everglades Trust “have it out for farmers south of Lake O.”

When the Everglades Trust, which is part of the Everglades Coalition, an organization that is compromised of several pro-environment, anti-Trump groups, posted their support for Mast on their Facebook page, the proverbial farming manure hit the fan.

Farmer Amy Ridgdill kicked off the festivities by posing the question,” Mast, why do you and the Everglades Trust have it out for farmers south of Lake O?  She also accused Mast for the drought.

Ridgdill continued, stating that she and others “love the land” they farm and take care of it “to the best” of their ability,” adding that her industry is “highly regulated by the state.”

Ridgdill’s question to Mast and the Everglades Trust prompted a response from the congressman himself. 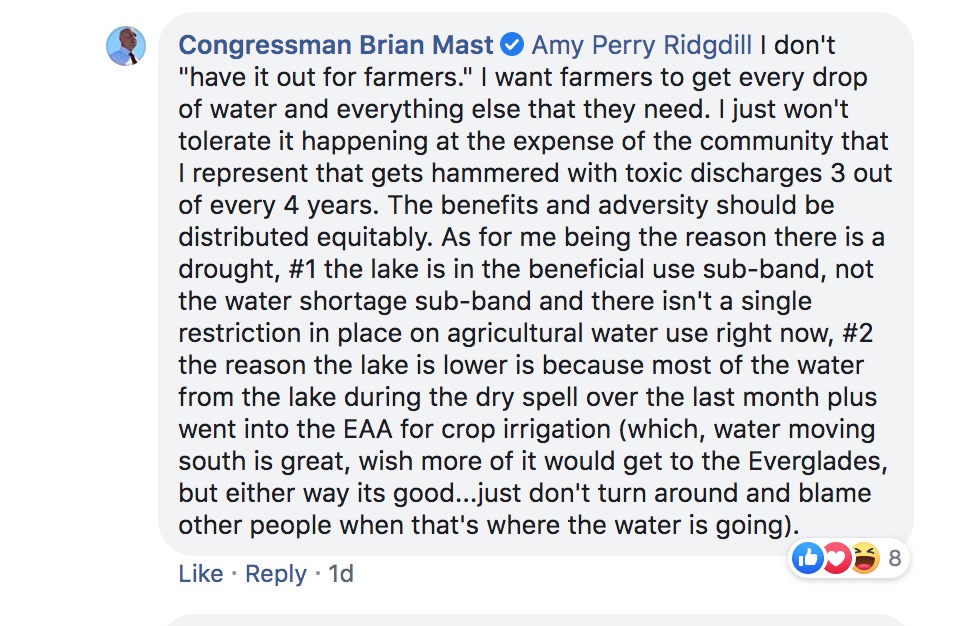 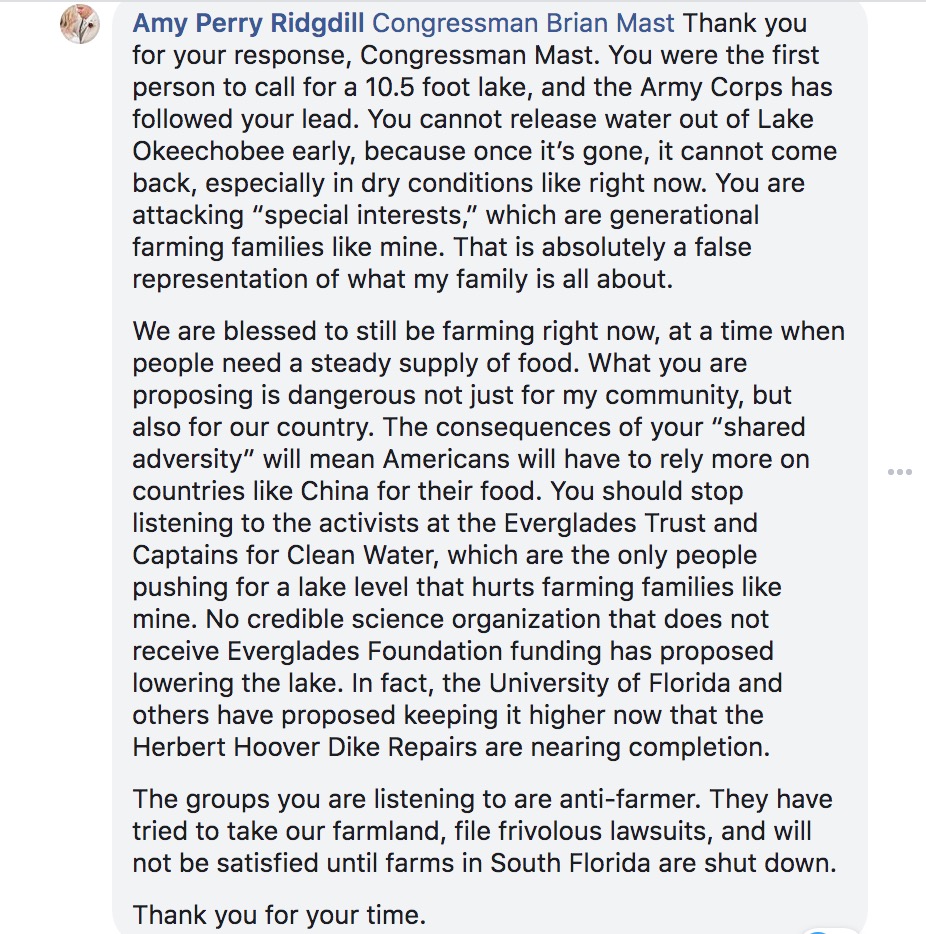 “I don’t “have it out for farmers.,” stated Mast “I want farmers to get every drop of water and everything else that they need. I just won’t tolerate it happening at the expense of the community that I represent that gets hammered with toxic discharges 3 out of every 4 years.”

Mast then addressed the drought accusation, stating, “As for me being the reason there is a drought, #1 the lake is in the beneficial use sub-band, not the water shortage sub-band and there isn’t a single restriction in place on

David Hafner, the vice president of the Martin County Farm Bureau, stated that Mast’s attack on farmers was just the congressman “inventing a false argument” and has deeply “disappointed” in  him.”

To makes things worse, an op-ed rebuttal to Mast’s initial opinion was posted in the Fort Myers News-Press calls him the “worst sort of politician” that blames “others for his own failures,” and blames him for “pushing hard to permanently lower Lake Okeechobee levels.”

Don’t expect Florida’s water wars to end anytime soon. There is significant money invested on both sides to keep interested parties engaged. Oh, and there is an election this year to boot.