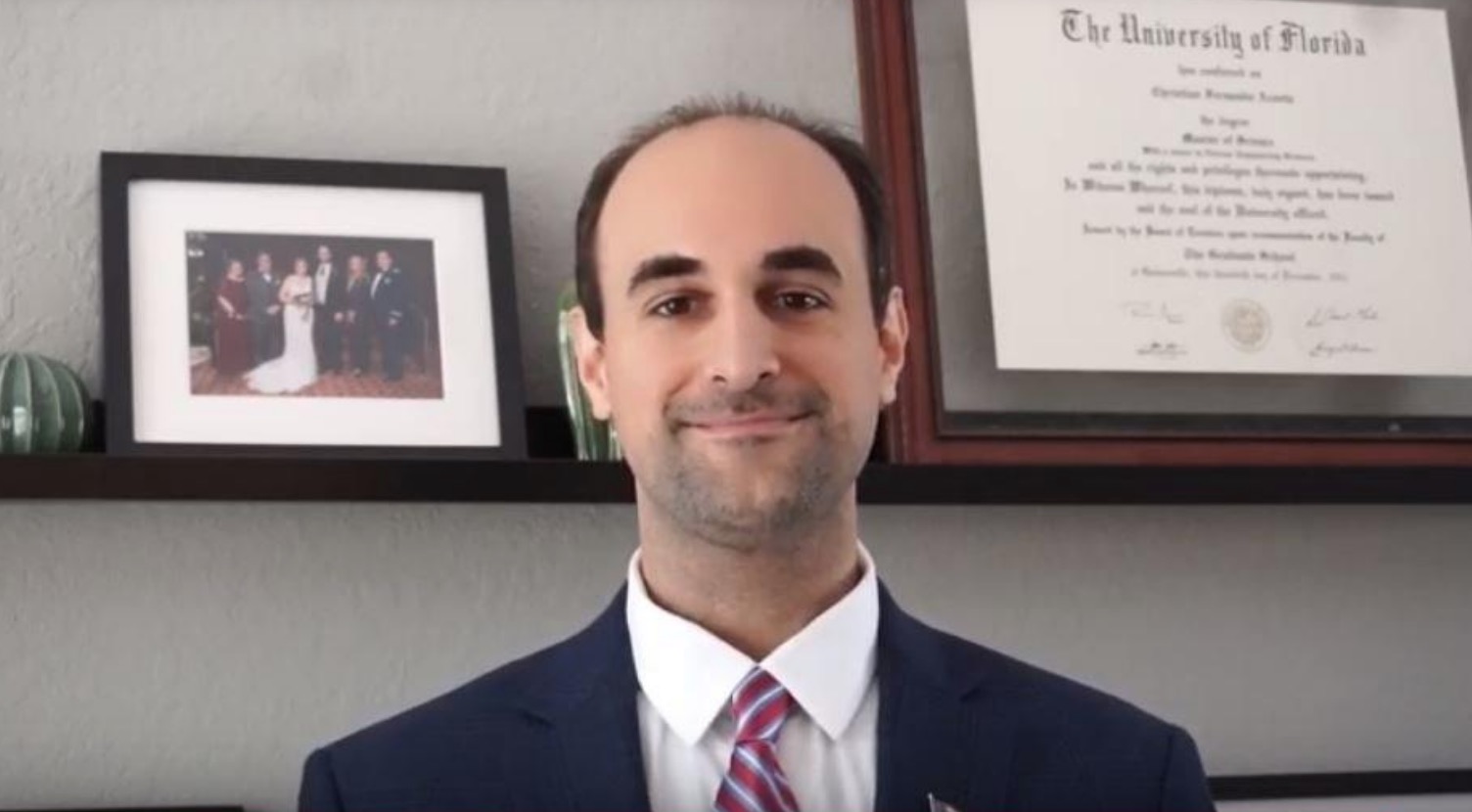 The 2020 election cycle is in full swing in Florida, and all of the incumbents hoping to hold on to their congressional seats, and the candidates, including Laura Loomer and Christian Acosta, vying to become the next members of the U.S. Congress, have now qualified to be on the ballot.

Politics is a blood sport and while most congressional candidates don’t have to revert to going too negative against their opponents, let alone lie about their respective campaigns or feel the need to exploit the President of the United States or some other elected official, there are those desperate enough who do.

This appears to be the case in the Republican primary race in Florida’s 21st congressional district, where Rep. Lois Frankel (D) is the sitting congressperson.

Conservative journalist Laura Loomer, who is considered the front-running is the Republican primary race for Rep. Frankel’s seat, is crushing the rest of the 5 candidates in fundraising.

But one of Loomer’s primary opponents,  adjunct professor Christian Acosta believes he is the only one that can beat Frankel.

With that said, Acosta has a little explaining to do about his claim that his “campaign raised more net funds than any other Republican candidate,” qualifying his  claim by stating that his definition of “Net” was the money any campaign is “left with after you subtract all the money you paid consultants.”

“First quarter fundraising results are in and our campaign raised more net funds than any other Republican candidate! “Net” is what you are left with after you subtract all the money you paid consultants!”- Christian Acosta 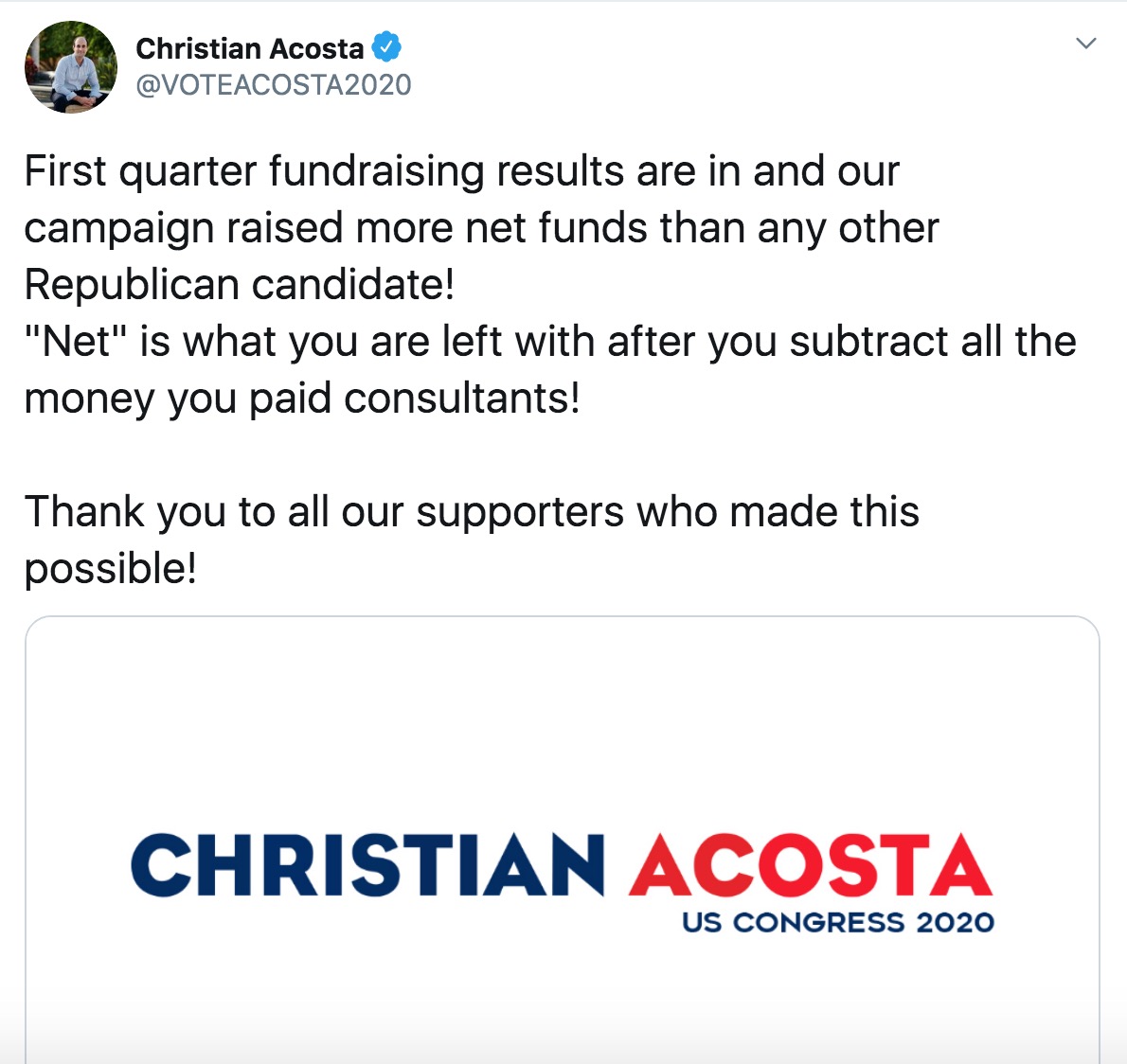 Regardless of what Mr. Acosta explains, his assertion that he outraised all of the “other Republican” candidates in the Republican primary race is false.

According to the Federal Elections Commission (FEC), Acosta’s certified filing shows that his net fundraising total for the first quarter of 2020 was $56,835.00, whereas Laura Loomer’s net total was $204, 786.23.

The numbers don’t lie but it appears as if Acosta did.

On February 18, 2020, Acosta held a fundraiser at a “private club in West Palm Beach” or “Winter White House” as was promoted on his campaign fundraiser invitation.

President Donald Trump’s home Mar-a-Lago, which has been dubbed the “Winter White House” by the press, is located in the City of Palm Beach, not West Palm Beach.

The invitation could suggest that the event was being held at Mar-A-Lago, but in reality, it was held at trump international golf club in West Palm Beach.

One of Acosta’s supporter’s posts on his Facebook wall that the event would also be holding an auction.

In another Facebook posting by an Acosta supporter, a picture of some of the items auctioned and their winning bidders was posted.

This type of auction customarily called a “Chinese Auction” or raffle.

According to Florida Statute 468.385, “No person shall auction or offer to auction any property in this state unless he or she is licensed by the department or is exempt from licensure under this act.”

State law also states that  “neglecting to follow Florida raffle laws is a misdemeanor in the second degree. If you are in violation of the law, you can face up to 60 days in prison and/or a fine of up to $500. Penalties for violating raffle laws in other states depend on the raffle laws by state.

An FEC attorney in Tallahassee, who ask that we not disclose his name, said that as long as the items in the “Chinese Auction” were itemized as “in-kind” donations on his FEC report, and the money donated for those items were also reported, and the maximum individual donation cap was not exceeded, a fundraising auction appeared to be above board.

But according to Acosta’s April quarterly report, none of the February 18th fundraiser expenditures have been reported.

This is a problem and an open invitation for someone to file an FEC complaint against him.

With President Trump having retweeted two tweets in support of her campaign, and with the 2020 primary election in Florida held in just a few months on August 18th, the political winds are clearly behind Laura Loomer’s congressional campaign. 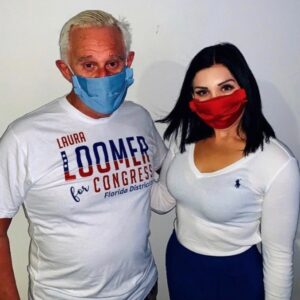 I was pleased to see the President tweeting in support of her campaign last week. Based on my 40 years of experience in electoral politics and a careful study of both polling and historical trends in the district I am convinced that she is not only the best-qualified candidate but the only Republican candidate with a real prospect of victory.

Those who say that she cannot win are either being disingenuous or they are ignorant regarding the dynamics of what I believe will be one of the most exciting congressional campaigns and prospective victories we will win in 2020. I stand 100 % with Laura Loomer and I am highly confident that she will be sworn in as President trumps congresswoman in January 2021.”— Roger Stone

With Stone’s full-throated endorsement of Loomer, coupled with the backing of other Conservative heavyweights like Michelle Malkin, Judge Jeanine Pirro, and U.S. Rep. Paul Gosar (R), this primary race was long over, as we previously mentioned.