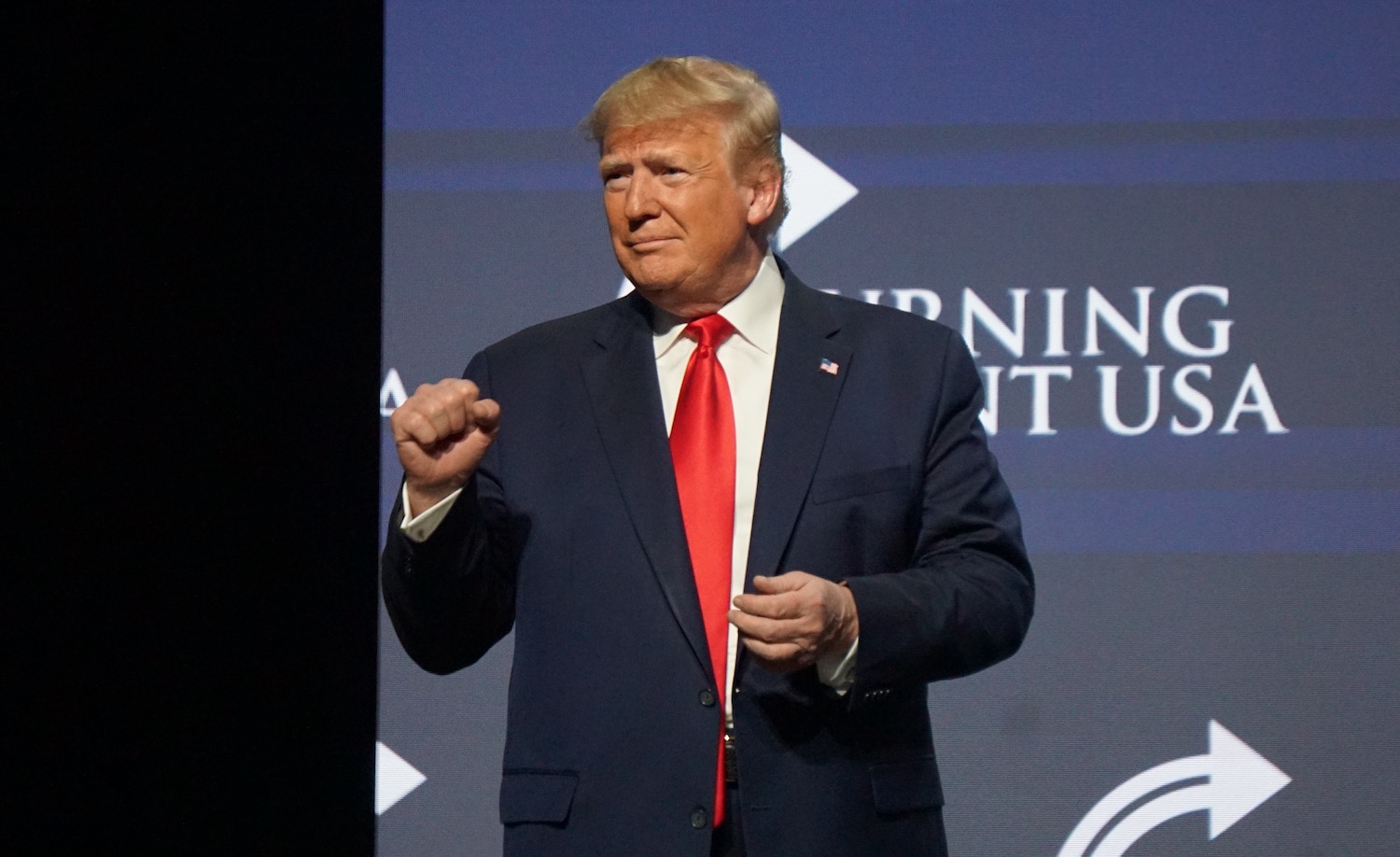 Trump killed a “clear and present danger to the United States”

Moments after the Pentagon confirmed that President Donald Trump ordered the targeted killing of Iranian terrorist and Republican Guard Corps Quds Force General, Qassim Soleimani, congressional Democrats and 2020 presidential candidates began to express their disapproval of killing an individual that has directly killed American military personnel as Israelis, not to mention other U.S. allies.

Trump claimed that Soleimani was targeted because he posed a credible and imminent threat to U.S. assets and personnel, but that wasn’t enough for he detractors, who dismissed the reason as being an excuse to start a war with Iran.

Florida Rep. Debbie Mucarsel-Powell (D) argues that all “the assassination of Soleimani” did was undermine the U.S. national security and “puts our troops in greater harm’s way.

Rep. Mucarsel-Powell points to the Twitter thread posted by Rep. Elissa Slotkin (D), a former Shia military analyst under both the Bush and Obama administrations, which makes the case why Soleimani should have been killed a long time ago.

Rep. Slotkin says that the Trump Administration “had the right to act in self-defense,” but must now go to the Congress to make the case for his action against Soleimani, and “consult” with them over any future military action against Iranian assets or Iran itself.

Here is the thread: 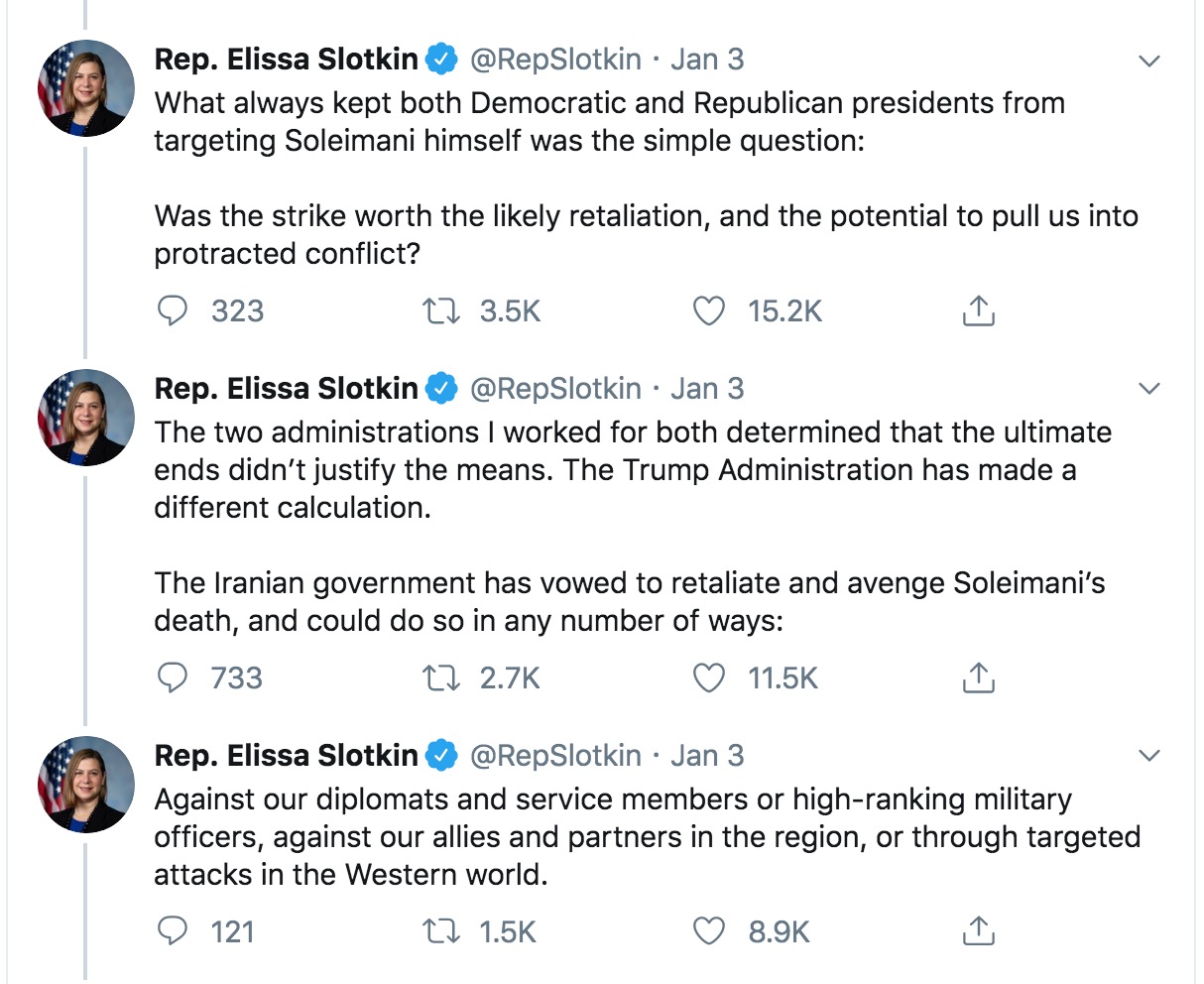 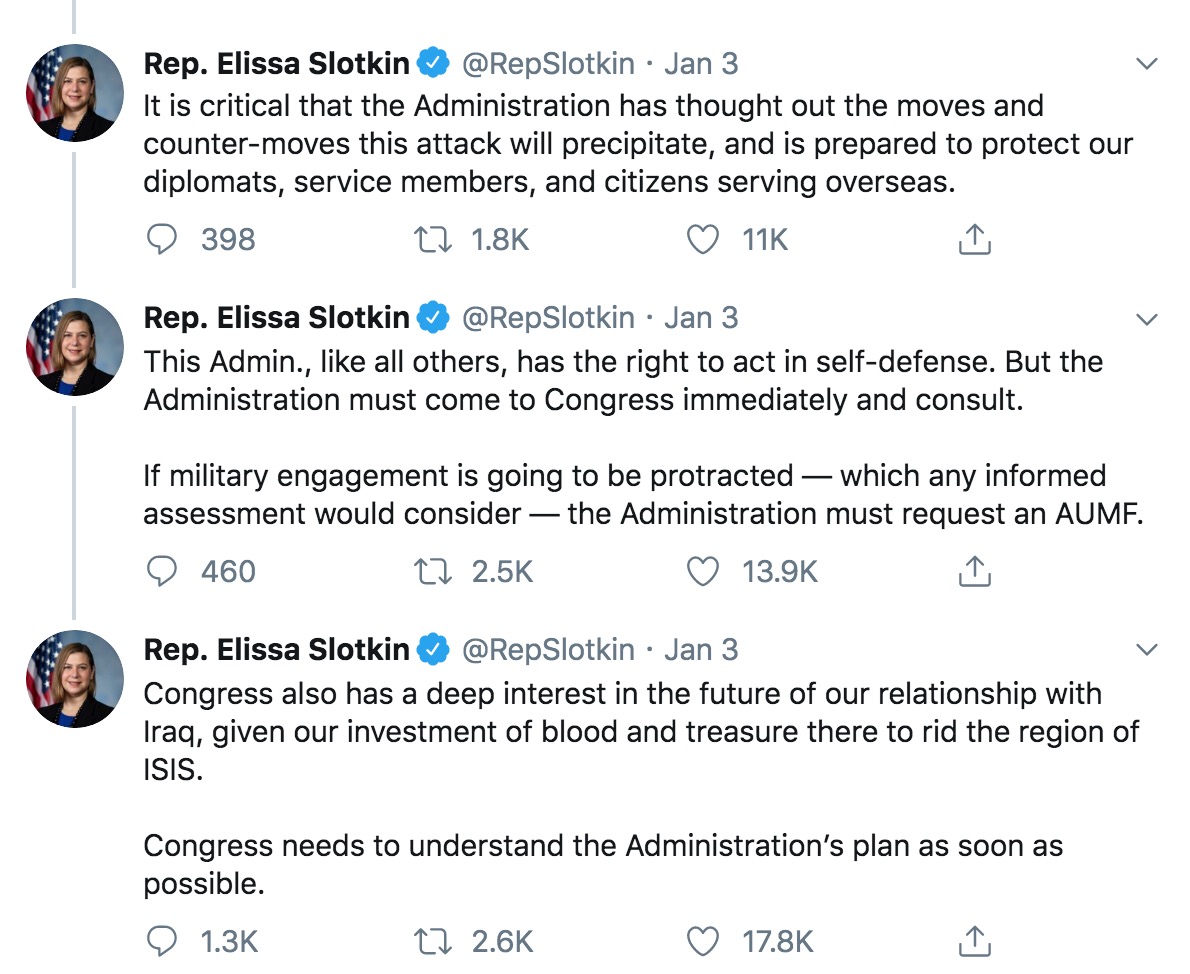 Mucarsel-Powell’s first tweet in regard to Soleimani, stated” Suleimani was a bad actor. But the President just committed an act of war without consulting Congress, putting American soldiers in harm’s way and dangerously circumventing the branches of government. President Trump must give us strategy information immediately.”

Suleimani was a bad actor. But the President just committed an act of war without consulting Congress, putting American soldiers in harms way and dangerously circumventing the branches of government. President Trump must give us strategy information immediately. https://t.co/yHqh2RT1Bc

The truth of the matter is that Presidents Barack Obama and George W. Bush both conducted covert assassinations against terrorist targets and didn’t get congressional permission. Trump’s killing of Suleimani is exactly what Obama and Bush did during their execution of the War on Terror.”

One of Mucarsel-Powell’s 2020  Republican congressional opponents, restauranteur Irina Vilarino, called out Mucarsel-Powell, calling her an ideologue that had “a problem for every solution” and invoked the terror attack at the U.S. consulate in Benghazi, Libya.

“The problem with ideologues is that they have a problem for every solution. Here’s one for you: Benghazi,” tweeted Vilarino.

Congressional Republicans are all on board and supportive of Trump’s decision, pointing to the known fact that Soleimani has killed hundreds of U.S. military personnel and thousands of overall innocent people in the region.

Soleimani was a worse “bad actor” than Osama Bin Laden.

This is a bold, decisive and frankly long overdue move on the part of the United States to take down Soleimani. He is directly responsible for the deaths of hundreds of American soldiers, thousands if not tens of thousands of people across the Middle East. He’s the equivalent of Iran’s Head of CIA and Special Forces that runs all their militias and proxies across Lebanon, Syria and Iraq. Particularly during the height of the Iraq War [he was] running the Iranian-backed Iraqi Shiite militias that were bombing, shooting, ambushing and killing U.S. soldiers.”

Even some of President Trump’s Republican detractors have put aside their issues with him and praised his decision to take out Soleimani. Prominent Criminal Defense Attorney Alvin Entin isn’t a big fan of the president’s, but noted that Trump’s decision was the correct one, reminding his Facebook followers that Soleimani was “an evil fanatic whose mission in life is the destruction of Israel, the United States and Judaic Christian society.”

You do not have to pay careful attention to my inane blathering to know that I proudly suffer from Trump Derangement Syndrome. However, no one, no matter how vile or corrupt, is wrong all the time. Yesterday presents a mixed bag. In response to Iran’s attacks on American contractors, Trump apparently ordered the assassination of an evil fanatic whose mission in life is the destruction of Israel, the United States and Judaic Christian society. Make no mistake, this man lived to do no good.

Prior to 9/11 Clinton had the opportunity to take out Osama Bin Laden, his failure to act led to the Twin Towers being destroyed and nearly 4,000 American lives. Perceiving a similar threat and eliminating it, I see as a net winner. Not only did it eliminate the evil arm of Quds leadership, but sent a message to Khamani, Rouhani and Zariff, we know where you live and we can reach you. It is a message for them to control their mischief.

We have not sent troops to effect regime change and repeat the mistakes of Iraq and Afghanistan. We have not started a war, but instead told them clearly that it is not in their best interest to do so. Here, like a blind pig finding a truffle, Trump did something right.

What he did wrong, almost, but not quite, counterbalances it. Rule #1 in the foreign policy playbook is do not take credit for ostensibly “ questionable “ acts. The Mossad never takes credit for targeted assassinations. While everyone may know they were behind it, they maintain at least plausible deniability. The message gets through without the blowback. Trump in his inability to maintain his tendency to braggadocio, has taken credit and invited, unfortunately, a response from Iran. Time will only tell whether the message sent will trump the message announced. I think it will.

I would rather gargle razor blades than vote for Trump, but he did remove a clear and present danger to the United States.

Iran has vowed swift retaliation against U.S. assets in the region in response to the targeted killing of Soleimani. This has Democrats concerned, but this was also the case when Obama killed Bin Laden. Many expected retaliation for that killing.