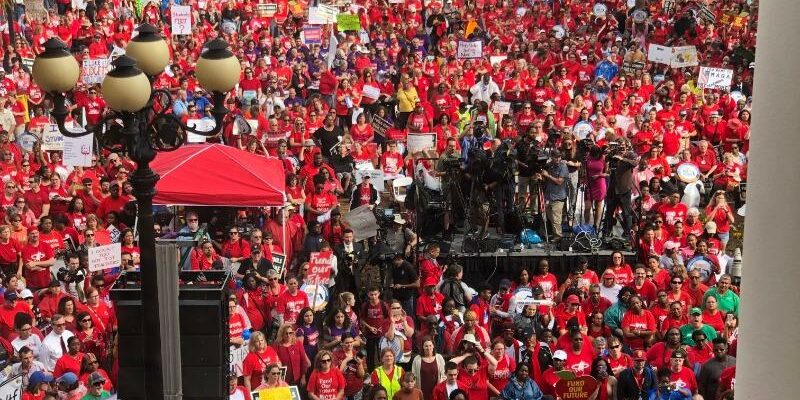 TALLAHASSEE --- Thousands of teachers, parents and students clad in red descended on the Florida Capitol the day before the start of the 2020 legislative session, demanding that lawmakers steer more money toward public schools.

Under gray skies Monday, state and national teachers’ union leaders led a march from Tallahassee’s Donald L. Tucker Civic Center to the steps of the Old Capitol to blast the Republican-dominated Legislature for failing to adequately fund education, even as Gov. Ron DeSantis has declared 2020 to be “the year of the teacher.”

“We are really not treated like professionals anymore. We are more just like task managers in the classroom. It is really, really demoralizing for our profession, and we just want more,” Lucia Baez, a language arts teacher at Miami Beach Senior High School, said in an interview.

The rally drew the attention of national figures such as civil-rights leader Al Sharpton, who elicited a roar from the crowd of at least 3,000 as he castigated lawmakers for not properly compensating educators.

“If this is the Sunshine State, then take the teachers out of the shade,” Sharpton said to crowd members, who traveled from all corners of the state to attend the event.

National Education Association President Lily Eskelsen Garcia said it “is the kids who are suffering. So, we want to bring the voices of the people who love other people’s kids to the state Capitol in Florida to say, ‘Do the right thing,’ ”

In a Sunday op-ed for the South Florida Sun-Sentinel, Sanders sympathized with Florida teachers about some of the lowest pay in the country.

“The indignities and stresses of high stakes testing are another reason teachers are quitting in droves. Like in other states, educators are being made to teach to the test and schools are being forced to sacrifice important subjects like arts education,” Sanders wrote.

The rally came as Gov. Ron DeSantis has made teacher pay one of the biggest issues of the 60-day legislative session, which starts Tuesday. DeSantis wants to spend $602 million to set minimum teacher salaries at $47,500 and to funnel $300 million to a new bonus program for teachers and principals.

But the rally attendees appeared unfazed by DeSantis’ proposals.

“We want those people who take care of those kids every day, starting with the cafeteria worker, the bus driver, the security monitor, the paraprofessional, and all teachers to have a raise and have a living salary. We know they are being crushed by student debt. We know health-care costs are rising every day, and we know that we live in a state that has disinvested in public education for 20 years, and that time has to stop,” he said.

But Sen. Joe Gruters, a Sarasota Republican who doubles as chairman of the Republican Party of Florida, fired back by touting DeSantis’ proposals.

“It is unfortunate that on the eve of the 2020 legislative session, Florida’s teachers’ union would stage a rally that encourages well-intentioned teachers to abandon their classrooms at the start of a school week leaving students and school administrators in flux,” Gruters said in a prepared statement. “The governor’s proposed 2020 budget recommendation includes a pay raise for more than 101,000 teachers in Florida by raising the minimum salary to $47,500. In fact, he is recommending nearly $1 billion dollars to increase minimum salaries and bonuses for teachers.”

The rally came after a controversy this weekend that centered on allegations the Florida Department of Education threatened Polk County teachers who planned to attend.

Polk County Superintendent of Schools Jacqueline Byrd asked the Department of Education to make teachers aware of the legal ramifications of a school walk-out after she learned that hundreds of county teachers were planning to take personal days Monday.

Education department officials warned Polk County teachers in an email that a “concerted failure to report for duty constitutes an illegal strike under Florida law.” The state agency made clear, however, that firing teachers is a decision made at the local level.

Before the rally started, Senate Democrats held a news conference to announce a $900 million plan to give pay raises to all public-school staff members.

Dozens of people in red shirts emblazoned with “Strong Public Schools” also marched the Capitol halls, spilling into a Senate committee room where a teacher-compensation proposal was being considered. But salaries weren’t their only concern.

“All of my kids are struggling with mental health issues because of testing and being so anxious all the time. It’s the scheduling. It’s the lack of ability to provide good solid teachers for them, and they end up with subs all year,” Jamie Paton, an English teacher at Ridge Community High School in Haines City, said.