It seems as if Florida Governor Ron DeSantis (R) can do no wrong, as even Democrats (not Gwen Graham) have been praising some of his achievements, especially when it comes to Florida’s environment, and on water issues.

Back in 2018, when Republicans and Democrats were at each other’s throats during the highly contentious gubernatorial contest between DeSantis and Andrew Gillum, there were some Republicans who decided to jump party lines and back Gillum.

One of those Republicans is Miami-Dade Firefighter Omar Blanco, who has just announced that he is running for the U.S. Congress in Florida’s 26thdistrict.

Omar is running against Restaurant owner Irina Vilarino, a Cuban exile who came over during the Mariel boat lift.

Blanco decision to back Gillum over DeSantis could work against him, if DeSantis decides to involve himself in one of the nations most hotly contested congressional races.

The seat is considered a toss-up, and Republicans will most likely look to the popular Republican governor for help.

Expect that help. DeSantis is a team player.

Just when you thought the end was near for Robert “Beto” O’Rourke, the not-so-Hispanic has invigorated his base of support by milking the mass shooting in El Paso, Texas for all it was worth. O’Rourke is also championing the Trump is racist narrative, which seems to be working among Democrats as the latest polls have him creeping up a bit.

Sen. Elizabeth Warren ‘s campaign is blowing up. Blowing up in a positive way. She is virtually tied with former Vice President Joe Biden in the latest Economist/Yougov public opinion poll. Pocahontas is surging at the expense of Sen. Bernie Sanders and Joe Biden. READ MORE

Sen. Kamala Harris and Pete Buttigieg have also benefitted from Biden’s gaffes and Sanders’ loss in support, but will it be enough?

This Republican congressional candidate has given Florida Republicans 3,000 reasons to vote against him.

Democrats vow to file legislation to ban guns, ammo, and accessories. Will Ted Deutch succeed, or will Republicans rain on their parade?

Democrats are saying that Republicans continue to suppress votes and are gearing up to spread the word about countering voter fraud…Rep. Debbie Wasserman Schultz has a couple things to say…

“As Elizabeth Warren surges in polls, Republicans deal the Pocahontas card” by The Floridian’s Javier Manjarres

Is this the beginning of the end for Joe Biden?

Like Democrats, Republicans are drawing a line in the sand and are gearing up for a big fight in 2020. Keep your eyes on Amanda Makki, Irina Vilarino, and Maria Elvira Salazar

Rep. Tlaib’s “hate for Israel overcomes her love for her grandmother.”

In turn, Israel banned both Congresswoman for perceived anti-Semitic comments made in the past, but Rep. Tlaib was granted permission to visit her family in the West Bank.

Several hours after Israel blocked entry to Reps. Ilhan Omar and Rashida Tlaib, the first two Muslim women to be elected to the U.S. Congress, Rep. Omar made the Israeli case why she should not be allowed to enter their country, as the posted a statement attacking Israeli Prime Minister Benjamin Netanyahu.

Wait, didn’t we just report that a sitting state Senator in Florida has endorsed a state Representative running for that senator’s seat?

Senator Anitere Flores (R), who is term-limited out of office, is backing Rep. Ana Maria Rodriguez (R) to succeed her in Miami’s Senate District 39.

From the desk of Florida Attorney General Ashley Moody:

“Attorney General Ashley Moody today issued a Consumer Alert warning Floridians about scammers attempting to steal consumer information using fake Equifax claims webpages. Fraudsters are sending phishing emails that impersonate Equifax encouraging consumers to enter personal information on a webpage that looks like the Equifax claims page. Last month, Attorney General Moody, along with 49 other attorneys general, announced an historic $600 million settlement with Equifax over failed security measures in a massive data breach that affected millions of Floridians. The agreement includes a Consumer Restitution Fund of up to $425 million, a $175 million payment to the states and injunctive relief.”

Agriculture Commissioner Nikki Fried wants school kids to eat up in the morning.

With students heading back to school across the state, Commissioner Nicole “Nikki” Fried is calling on Florida schools to participate in the Florida Breakfast Challenge. Open to all Florida schools participating in the National School Lunch Program, the Challenge aims to increase student participation in school breakfast. 2.9 million students in Florida currently receive school lunch.

This is the first year for the Florida Breakfast Challenge, which is a partnership between the Dairy Council of Florida, No Kid Hungry, and the Florida Department of Agriculture and Consumer Services.

I promise not to do this to Greenland! 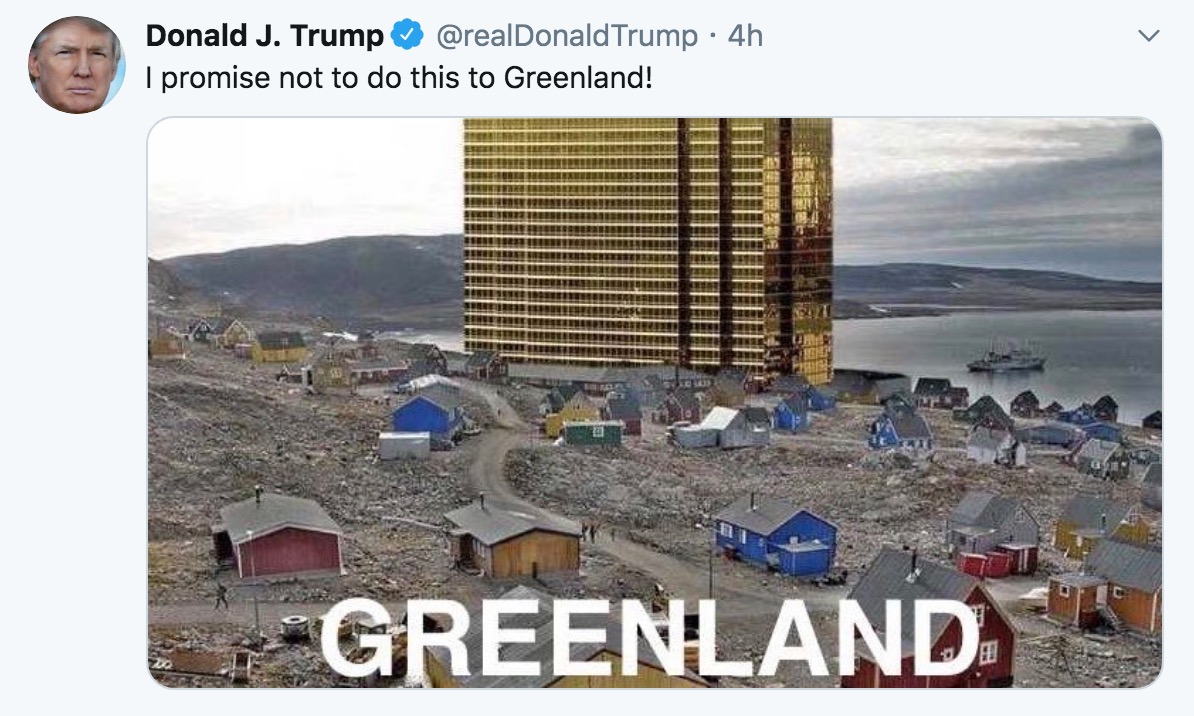 This is demonstrably false. Americans are paying these tariffs, not China. And they sure as heck are feeling the pain.

“You have to say something.” Two US athletes protested against Trump upon receiving an award. They could be punished by Telemundo

American athletes Race Imboden and Gwen Berry took advantage of the stage of their sporting victories at the Pan American Games that end this Sunday to criticize the president, Donald Trump. But the decision to express their opinions in that context, a competition held in Lima (Peru), could cost them punishment by the American Olympic Committee and the organization of those games.

Fencer Race Imboden knelt on Friday on the podium where he was awarded the gold medal after arriving first in a team competition of his discipline with two teammates. Meanwhile the US national anthem sounded, and the other two award-winning athletes stood.

With a message on Twitter, Imboden, 26, explained his gesture. “My pride [for representing the US in the Games] was affected by the many defects of the country I love so much. Racism, gun control, mistreatment of immigrants and a president who feeds hate are only the first in a long list, ”he wrote. “I have decided to sacrifice this moment to draw attention to issues that I think need it.” Read more…

Migra took Wendy’s dad and Melanie’s aunt. None know when he will see them again, but they are sure that “they are neither criminals nor animals … they were just working” Read more

Police on Friday arrested a 25-year-old Dayton Beach, Florida, man after his ex-girlfriend alerted them to text messages he sent her indicating he was planning a mass shooting, according to the Volusia County Sheriff’s Office.

The man, Tristan Scott Wix, allegedly sent messages describing a school as “a weak target” and saying he would be “more likely to open fire on a large crowd of people from over 3 miles away.”

Let’s make this a simple as possible. Warren is surging and Biden is wilting away. The latest Fox News poll has Biden up by 13 points but the Economist/Yougov poll has Biden only leading Warren by 3 points