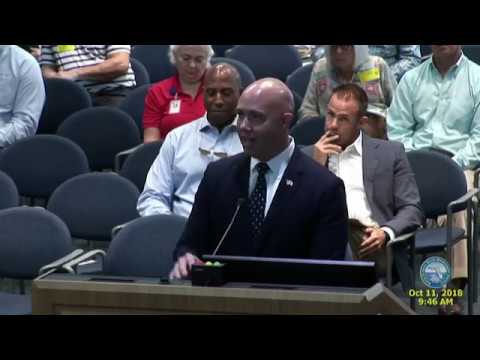 A group of members of the U.S. House of Representatives have penned a letter to the Trump Administration asking for the government to “fully fund” all water programs that “combat algae blooms” in President Trump’s upcoming budget appropriations request.

Mast’s congressional district is ‘ground zero’ for the toxic algae blooms, so taking charge to clean up water ways is not only beneficial for his constituents, but for his re-election efforts.

Mast is right about cleaning up the water, but his recent request to the South Florida Water Management District to lower Lake Okeechobee water levels to stem the flow of toxic water, could cause bigger problems for the greater population of south Florida.

During a recent SFWMD pubic meeting, Mast demanded answers as to what the district was going to lower the lake levels.

Mast also mentioned a meeting in Washington that he had on the matter with Executive Director Ernie Marks, where it was stated that there was no level for which the “lake could be too low”

Marks confirmed that “those conversations” were had, addressing Mast, “you did ask me all the way down to 8 feet, you didn’t ask me about 7 feet.”

Mast then responded to comment that the board was “not in the business of picking winners and losers” as to who got water first.

“And I didn’t get an answer, by the way, if you would work towards 10 ½ feet, the bottom of the that schedule. Acknowledging that there is still an ability to pump water all the way down to 8 feet on the lake.”

Moments later, Mast tangled with board vice chairwoman Melanie Peterson, who explained that everything was already being done to fill water requests from Floridians on the west coast of the state, and that the “amount of water” he was asking to be drained from Lake Okeechobee was not doable.

“Every inch off Lake Okeechobee matters, “said Mast as he pressed from Peterson and the rest of the board to drop lake water levels to no less than 8 ft.

When it comes to drinking water in Florida, every inch matters.

In 2011, the city of West Palm Beach reached a water crisis and could not tap into Lake Okeechobee, the city’s main water source, because the lake’s water level was extremely low at the time.

Because of the drought, the governing board of the South Florida Water Management District ordered water restrictions since Lake Okeechobee water was not available.

Auduban Florida issued a report during the 2011 drought which included published aerial pictures of Lake Okeechobee, showing the results of water levels dropping to levels that Rep. Mast is asking for.

“The lake elevation had dropped below 10 feet that day, a level we never want the lake to drop to; as evidenced by the recent mass-abandonment of Everglade Snail Kite nests.”-Audubon Florida

According to the SFWMD, lowering the lake’s water levels to what Rep. Mast is proposing, would be catastrophic, endanger wildlife, “compromise” the water supply and impact “public health and safety.”

Lowering the lake water levels would also negatively affect crops in the region, and could hike up national food prices and “availability.”

What’s worse is that Mast’s water level proposal, would not only increase toxic discharges, but it would leave S. Floridians parched, as drinking water would be cut south of the lake.

Below are some informative graphics offered by the water management district, outlining the effects of lowering Lake Okeechobee water levels. Drinking water would be severely “compromised” drinking water and impact “public health and safety” to not only the Seminole Tribe of Florida, but to cities like Fort lauderdale and West Palm Beach.

take our poll - story continues below
Completing this poll grants you access to The Floridian updates free of charge. You may opt out at anytime. You also agree to this site's Privacy Policy and Terms of Use.
45
SHARES
ShareTweet
Tagged: brian mastflorida politicsfloridianpress.comlake okeechobeethe floridian