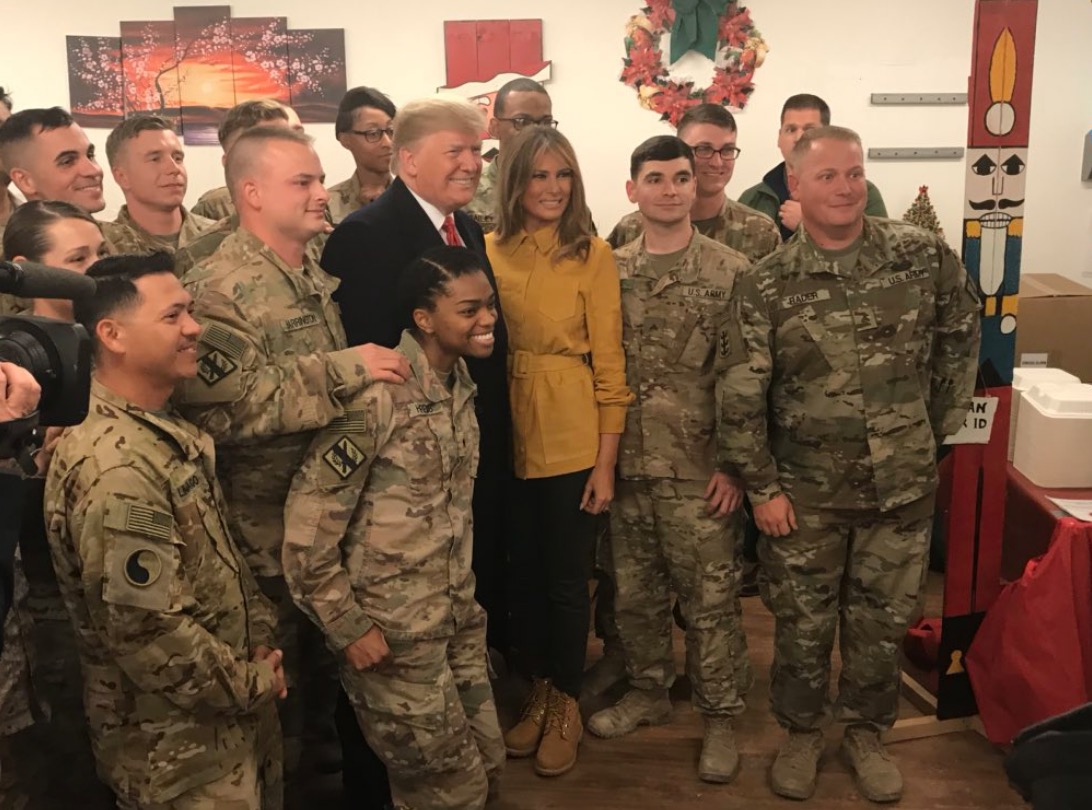 Trump visits US Troops in Iraq, addresses pull out of Syria

President Trump and First Lady Melania surprised the nation, the world, when they showed up to visit U.S. servicemen and women stationed in Iraq.

Trump had recently cancelled his Christmas vacation trip to Palm Beach and was expected to stay in Washington during the ongoing government shutdown, but according to the president himself, the trip to the Middle East was planned 3 weeks ago.

Reporters ask Trump about any possible effects his decision to pull out of Syria could have with troops in Iraq.

Trump said that he pulled out because he had given generals on the ground enough time to engage the enemy, and believed that it was time to bring U.S. military personnel home.

Q    Mr. President, what effect will your decision in Syria to pull out the 2,000 troops have here in Iraq?

THE PRESIDENT:  Well, you know, we can do things from Iraq that — we can take over some of the slack.  But, as you know, we’ve knocked out about 99 percent of the caliphate.  It’s time to bring them back.

And then they said again, recently, “Could we have more time?”  I said, “Nope.  You can’t have any more time.  You’ve got enough time.”

We’ve knocked them out.  We’ve knocked them silly.  I will tell you that I had some very good talks with President Erdogan, who wants to knock them out also.  And he’ll do it.  And others will do it, too, because we’re in their region; they should be really sharing the burden of cost, and they’re not.

So, these people are going to have to start doing a lot of their own work, and they’re going to have to start paying for it, because the United States cannot continue to be the policeman of the world.  We don’t want to do that.  We want to protect our country.  These people want to protect our country.  They’ve been here a long time.

When asked about if his troop pull-out of Syria could possibly jeopardize Israel, Trump said that he had already spoken to Prime Minister “Bibi” Netanyahu, and that the $4.5 billion dollars in aid the U.S. sends to Israel was more than enough.

Q   About the criticism that, by leaving Syria, you might increase jeopardy for Israel, how do you respond?

THE PRESIDENT:  Well, I don’t see it.  And I spoke with Bibi.  I told Bibi.  And, you know, we give Israel $4.5 billion a year.  And they’re doing very well defending themselves, if you take a look.

But we’ll be there for Israel.  We’ll always be there for Israel.  I’m the one that moved the embassy to Jerusalem.  You know, nobody was willing to do that.  All these Presidents came and went.  They all said they will do it.  They never did it.  Many, many Presidents said they were going to move the embassy to Jerusalem.  They never did it; I did it.  Big difference.