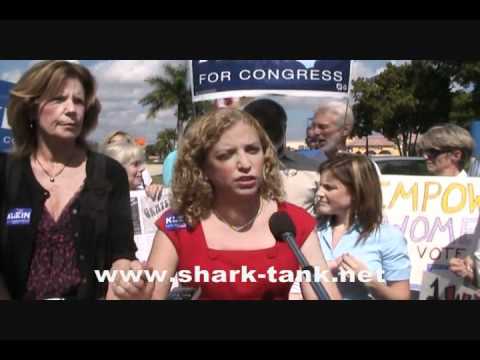 Controversial Congresswoman Debbie Wasserman Schultz (R) has once again injected herself into the political limelight by referencing the now-infamous exchange she had with then-Congressman Allen West.

“A Republican once sent an email calling me “vile, unprofessional, despicable” and “not a lady,” concluding I should “shut the heck up” because I had the nerve to call him out on his misogyny. From one woman who can’t be silenced to another, keep up the fight!”- Rep. Debbie Wasserman Schultz (D)

A Republican once sent an email calling me “vile, unprofessional, despicable" and “not a lady,” concluding I should “shut the heck up” because I had the nerve to call him out on his misogyny. From one woman who can’t be silenced to another, keep up the fight! https://t.co/Rlx1Z9tjHO

Allen West made those remarks on the House floor against Wasserman Schultz shortly after she called him out on that very same House floor.

Here is what West emailed Wasserman Schultz, Pelosi, and other members of the House of Representatives:

Look, Debbie, I understand that after I departed the House floor you directed your floor speech comments directly towards me. Let me make myself perfectly clear, you want a personal fight, I am happy to oblige. You are the most vile, unprofessional ,and despicable member of the US House of Representatives. If you have something to say to me, stop being a coward and say it to my face, otherwise, shut the heck up. Focus on your own congressional district!

I am bringing your actions today to our Majority Leader and Majority Whip and from this time forward, understand that I shall defend myself forthright against your heinous characterless behavior……which dates back to the disgusting protest you ordered at my campaign hqs, October 2010 in Deerfield Beach.

You have proven repeatedly that you are not a Lady, therefore, shall not be afforded due respect from me!

West mentions a “disgusting protest” (see highlighted text above) she conducted against him back in 2010 when she showed up to his campaign headquarters to defend her close friend and colleague Rep. Ron Klein (D).

The media never questioned what West was referring to until a Shark Tank video I shot of Wasserman Schultz saying that West thought “it’s OK to objectify and denigrate women” resurfaced. (Wasserman Schultz’s remarks against West are made at the very beginning of the video)

The video originally aired on Hannity and other Fox News programs during the 2010 midterm election when Wasserman Schultz all-but called “Tea Party” activists of being racists.

“I don’t see any Swastikas or any pictures of the President in blackface or burned in effigy here.”-Video 3:02min

It wasn’t until West made his “vile” remarks against Wasserman Schultz, did the video gain new life.

Hannity’s producers called to ask if I knew the background behind the remarks. I reminded them about the video they already had in their possession.

That very same day, the case was made for why West called her out.

Hannity and Van Susteren both re-aired the video, and then every single Sunday morning political news program did the same.

The following Monday morning, the argument against West was over.