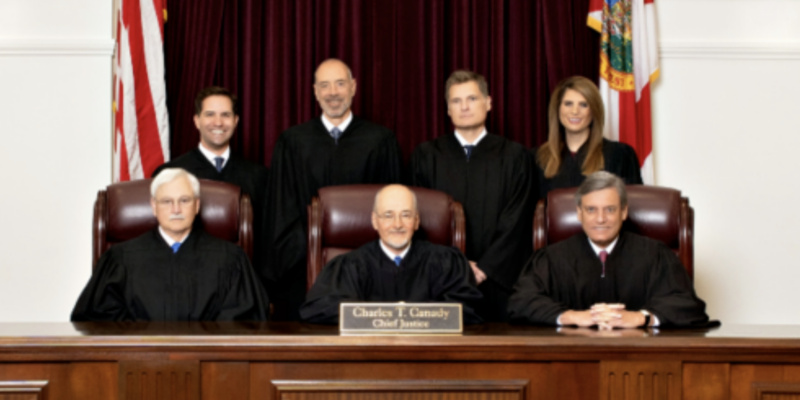 TALLAHASSEE — The Florida Supreme Court on Thursday ordered new trials for two Death Row inmates, including for a man convicted in the murders of a Broward County couple after his mother provided key testimony.

In somewhat-unusual moves, justices overturned the convictions of Peter Avsenew in the 2010 murders in Broward County and of Jason Simpson, who was convicted of killing a drug dealer and the dealer’s pregnant girlfriend in 1999 in Duval County.

In both cases, the Supreme Court found that judges made errors that required new trials. Avsenew was sentenced to death in 2018, while Simpson was sentenced in 2007.

Avsenew was convicted in the shooting deaths of Steven Adams and Kevin Powell and taking the couple’s sport-utility vehicle and money. Avsenew, who had been staying with the couple, drove to Polk County, where his mother, Jeanne Avsenew, lived.

After a series of circumstances, including Avsenew telling his mother he was driving a stolen SUV, she did a computer search and found that he was a “person of interest” in the murders, according to the Supreme Court ruling. She contacted police, and Avsenew was subsequently arrested.

But Thursday’s ruling centered on video testimony of Jeanne Avsenew that was used in her son’s trial. The appeal did not take issue with video testimony, which is allowed under a court rule if a witness is unable to attend a trial.

Justices, however, said the set-up of the equipment used in the testimony prevented Jeanne Avsenew from seeing her son. That violated a rule that says courts must “keep the defendant in the presence of the witness.”

In the unanimous ruling, the Supreme Court said it “does not take lightly the impact of today’s decision. However, the introduction of Ms. Avsenew’s testimony constituted harmful error, and we are bound to rule in a manner that remedies such error.”

“We cannot overstate the harmful effect of this testimony having come from not just anyone, but defendant Avsenew’s own mother,” the 16-page ruling said. “Indeed, the jury heard a recording of a phone call placed by Avsenew while he was in jail awaiting trial, wherein he mentioned that the ‘lead witness against me is my mom.’ Without question, the impact of Ms. Avsenew’s incriminating testimony on the jury would have been even greater because she is Avsenew’s mother. The state cannot demonstrate that there is no reasonable possibility that the testimony of Ms. Avsenew — a material state witness — contributed to the jury’s guilty verdicts.”

In the Duval County case, the Supreme Court said Simpson should receive a new trial because prosecutors did not disclose that a witness against him was a confidential informant for the state.

Simpson was convicted in the murders of drug dealer Archie Howard Crook and Crook’s pregnant girlfriend, Kimberli Kimbler. They were hacked to death with an ax in the bedroom of their home, according to the Supreme Court ruling.

The witness whose work as an informant had not been disclosed was Crook’s son, Archie Clyde Crook — identified in the ruling as “Little Archie.” Simpson’s defense attorneys argued during the trial that Little Archie had killed his father and Kimbler.

Little Archie had served as an informant against another man, George Michael Durrance, who was described in the ruling as being an associate of the Crook father and son and Simpson in the drug trade.

Durrance also was a figure in the Simpson murder case, and the Supreme Court, in a 5-1 decision, said Little Archie’s role as a confidential informant should have been disclosed.

The majority opinion said the “relationship between Simpson, Little Archie, and Durrance was of critical importance in this case, and the information Little Archie provided to law enforcement pertaining to Durrance casts a different light on this relationship.”

The opinion, shared by Justices Ricky Polston, Jorge Labarga, Alan Lawson, John Couriel and Jamie Grosshans, also said “Little Archie’s testimony and credibility were of significant consequence when we consider the lack of evidence linking Simpson to the scene of the crime.”

But Chief Justice Charles Canady dissented, writing that the failure to disclose the information about the informant “was not material and did not prejudice Simpson.”

“The fact that Little Archie had been a source to law enforcement in unrelated matters is of little, if any, relevance, and in light of the other information known to the jury about Little Archie, would not have been an indication that he had a particular bias toward law enforcement or the state,” Canady wrote. “There is no reasonable probability that had this information been disclosed to Simpson, the result of Simpson’s trial would have been different.”

Justice Carlos Muniz was recused from the case.

Simpson, now 48, and Avsenew, now 37, are inmates at Union Correctional Institution, according to the Florida Department of Corrections website.