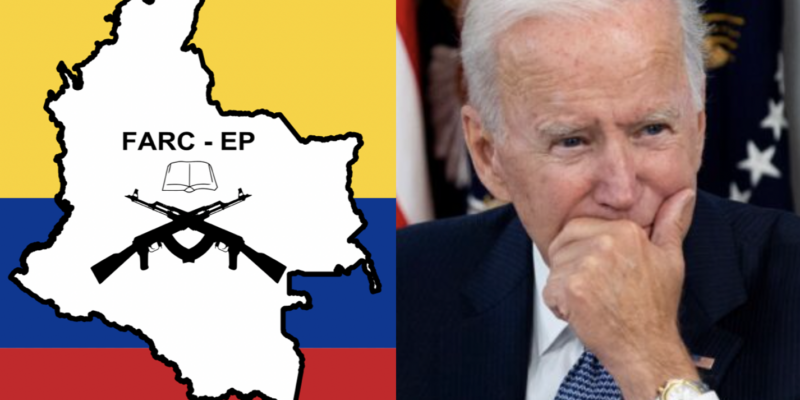 In 1997, then-President Bill Clinton and his administration labeled the Revolutionary Armed Forces of Colombia (FARC) a terrorist organization over its continued, blatant and random killing of innocent people as it tried to assert its political agenda on the country, but now President Joe Biden is going to lift the FARC’s designation as a terrorist state.

"We have started the process of consulting with Congress on actions that we are taking with regards to the FARC," State Department spokesman Ned Price said this week.

By lifting the terrorist organization designation and sending aid to the FARC, the Biden administration will be directly funding the ‘Narco-guerrilla’ group's main economic catalyst— drug trafficking.

What’s worse, FARC has been a partner to other Communist and Socialist dictatorships in the Western Hemisphere—Nicaragua, Venezuela, and Cuba.

Colombian-born State Senator Annette Taddeo, a Democrat running for governor of Florida who is not afraid to challenge her political party, knows all too well about the criminal and terroristic actions of the FARC.

“When I was 17 years old I was forced to flee Colombia, the only country I ever knew because of the Marxist terrorist organization, FARC, a group of militias who kidnapped my father who was a WWII American fighter pilot,” tweeted Taddeo.

Taddeo also recently stated that she has been in communication with the State Department and expressed her frustration and opposition to the delisting.

In a written statement to The Floridian, Sen. Taddeo highlighted the partnership between the FARC and the Castro and Maduro regimes, calling for their immediate condemnation. Cuba and the regime in Venezuela have played a significant role in the humanitarian crisis that has plagued Venezuela.

“The FARC, funded by the Castro regime and now by the Maduro regime as well as the narco trade are terrorists. We must condemn them.  Just like the Sandinistas and other groups who have terrorized, persecuted, tortured, and kidnapped individuals in other countries. For me and many of us this is painful and very personal,” stated Taddeo.

Sen. Taddeo is not the only Florida Democratic elected official to express concern over the Biden Administrations' move to lift the designation.

Miami-Dade Mayor Daniella Levine Cava urged President Biden to reconsider the move because “FARC is a dangerous terrorist group that caused deep pain for so many.

“We're at a pivotal inflection point in Latin America & should double down to reject the extremist communist agenda that destroyed nations like Venezuela,” added Mayor Cava.

U.S. Senator Rick Scott (R) called the administration's delisting as “absolutely unacceptable” and that the president “chooses appeasement & proves he doesn’t care about the security & stability of Latin America.”