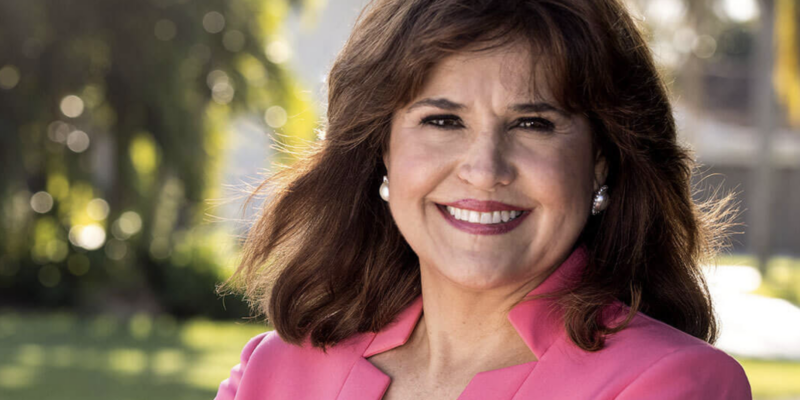 Florida State Senator and Democratic gubernatorial candidate Annette Taddeo, who continues to traverse the state after formally announcing her intentions to challenge Gov. Ron DeSantis in 2022, believes that both political parties “suck.”

In a phone conversation with The Floridian, Sen. Taddeo spoke very candidly about her very own Democratic Party and her gubernatorial primary opponent, Agriculture Commissioner Nikki Fried, as well as Gov. DeSantis.

Taddeo was taken back by Gov. DeSantis’s decision to sign the recently-passed anti-mandate legislation in Brandon, Florida, calling it a political move that was “all for show.”

“The fact that he did the signing of the bill in Brandon, if that doesn’t tell you how low we’ve come, then I don’t know,” said Taddeo before criticizing Democrats for their actions leading up to the vote.  “I’m just as mad at Democrats for being chicken shits. You got to have a semblance for respect for the office. I’m the first one to criticize my own people and Republicans. This is not a game, this is all for show, and today’s signing in Brandon proves it.”

Taddeo then pivoted to Commissioner Fried’s recent remark that DeSantis has threatened lobbyists and lawmakers if they did not support his legislative agenda.

“I’m so glad I’m in this race because both parties suck. We need to get it together.”-Sen. Annette Taddeo.

”Never, never, of course. But I haven’t heard this even from others,” said Taddeo when we asked her if DeSantis has ever threatened her.

Taddeo added that she had only one meeting with DeSantis and it was with former Chief of Staff Shane Strum, who she said was very cordial to her. Both men were respectful.

She waited months to jump into the gubernatorial primary race, a move that many politicos believed was a bad move, but Taddeo says that it was the right move for her campaign.

“The more than I waited, the more than I had people calling and telling me that they need a real candidate,” added Taddeo who said Democrats “Wanted someone they can be excited about.”

Taddeo concluded by taking a jab at both Rep. Charlie Crist and Commissioner Fried, saying, “I can go back to making money. Instead of seeing my net worth go down, unlike others.”

The jab appears to be another slight against Fried, whose net worth jumped from around $270k in 2018 to $1.4K in just over a year.