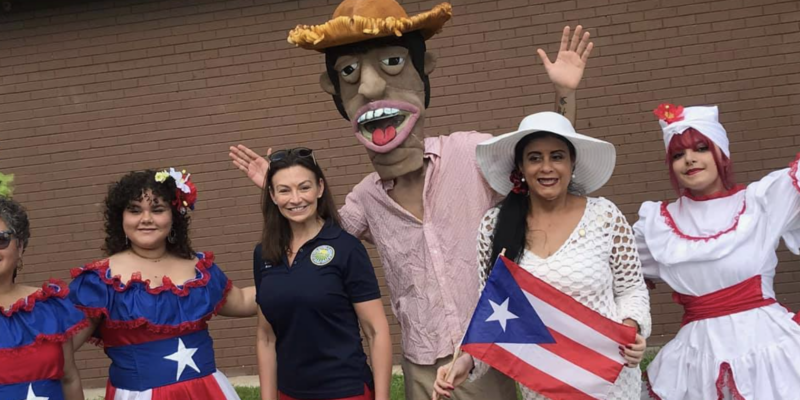 Florida Agriculture Commissioner Nikki Fried was at last weekend’s Puerto Rican Day parade in Orlando, where she took the opportunity to pose with participants in the parade, including a man wearing a “black face” mask depicting a Hispanic male.

The mask also exaggerates the Afro-Latino facial features it is depicting—big lips, big teeth, and a big nose.

Fried did not call DeSantis or the Republican-led legislature racist, but she did imply that the bill, now a law, took individuals back “to a time and place when people didn’t have the right to vote, didn’t have access to the ballot box.”

“What this bill does is silence those voices. This bill does nothing good but harm and silence the people who need a voice at the table. We must stand together united to fight voter suppression. Too many people in our history have marched, have fought, and have lost their lives to give us the right to vote today,” said Fried. “And now, this Legislature is doing everything they can to suppress those votes and to turn back time – to a time and place when people didn’t have the right to vote, didn’t have access to the ballot box, and we must stand united to fight this. This is voter suppression because they don’t want to hear from the people. And we see this time and time again in the [Capitol] building behind us – that when the people vote, they don’t even listen.”

Fried has also challenged DeSantis regarding Critical Race Theory, the education concept that pushes educators to teach students about the history of slavery, segregation, and that Americans are inherently racist.

Fried continued: “Unless you teach compassion and teach understanding, and make people know our history, how are we ever going to come together as a society and stop looking at race, and stop looking at religion, and look at us as the United States of America as a united front? The only way to do that combats it head-on, talk about the systemic racism that is in our state and our country, and anyone who says otherwise.”

Laura Loomer, the Conservative Journalist running for the U.S. Congress against Rep. Daniel Webster (R), caught on to the image Fried posted on her Facebook page, calling her a hypocrite for posing maskless in the picture.

“In true, hypocritical, progressive Democrat form, wannabe FL Governor Fried has been caught maskless while posing for photos next to a man in black face,” stated Loomer. “This is the same woman who has falsely accused Republicans and Governor DeSantis of “killing kids” for being against unconstitutional mandates, and this is the same woman who has accused Governor DeSantis of being a “racist” after he banned racist critical race theory from Florida.

"The only racist and hypocrite I see is Nikki Fried who is a typical “rules for thee but not for me” Radical leftist. I’m confident the  people of Florida will reject her big government hypocrisy and racism at the polls in 2022!”

Just this past week, Democratic Rep. Alexandria Ocasio-Cortez appeared at the maskless Met Gala in New York City, and Democratic-supporting actors and performers attended the Emmy Awards without masks, and not adhering to social distancing