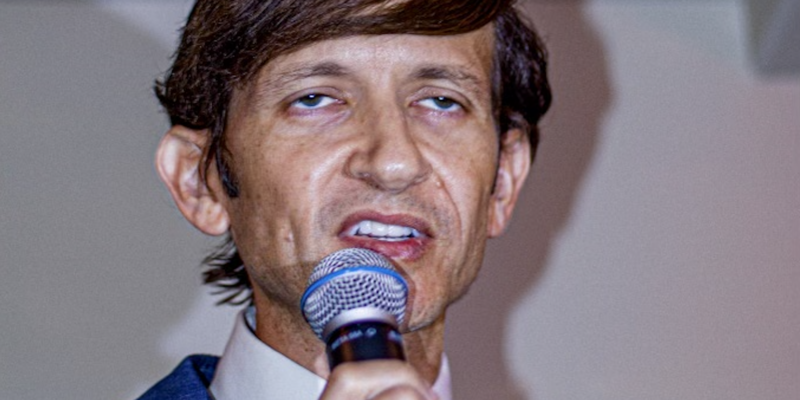 The Chairman of the Grievance Committee for the Republican Party of Florida (RPOF) and current State Committeeman for Broward County, Richard Lee DeNapoli, may have committed felony voter fraud after he allegedly voted twice in two different Florida counties during the 2014 midterm election – an election in which he was a candidate for Florida State Representative, District 74 in Sarasota county.

The Floridian commenced an investigation into Mr. DeNapoli’s voting history after receiving a tip from a protected source. In the course of that investigation, evidence was uncovered that he voted by mail in Sarasota and Broward counties in both the 2014 primary and general elections. Our evidence was quickly turned over to the Florida Department of Law Enforcement (FDLE) for their review.

The FDLE opened a case concerning Mr. DeNapoli, and according to a letter obtained by The Floridian regarding Case # MI-73-2325, Mr. DeNapoli appears to have escaped prosecution for voting twice in an election due to the expiration of the statute of limitations.

In the letter, FDLE Special Agent Kenneth Haberland “confirmed with the law enforcement agency’s Regional Legal Advisor, Jackie Boswell,  that “the statute of limitation had expired” and that the agency would not pursue criminal charges against Mr. DeNapoli.

In addition, Broward County Assistant State Attorney (ASA) Chris Killoran, who is the Supervisor of the Public Corruption Unit and was contacted by SA Haberland,  initially said that the statute of limitations had expired.

Once the FDLE concluded their inquiry in the case and had the report approved for public records, the legal department within the agency released the letter to The Floridian.

Anyone arrested and convicted of violating FL Statute 104.18 in an election could face a prison term of up to five years and/or a fine of $5,000.

President Trump’s assertion that felony voter fraud was committed is centered around the same vote-by-mail method of voting DeNapoli appears to have partaken in when he allegedly voted by mail twice in Sarasota County and twice in Broward County during the 2014 election cycle.

When he signed the bill into law, Gov. DeSantis highlighted many features of the measure, including voter ID regulation for voting by mail, creating limits on who can pick up and return a voter’s ballot, and banning private funding for elections.

“Florida, your vote counts, your vote is going to be cast with integrity and transparency and this is a great place for democracy,” said DeSantis upon signing the bill into law.

During the 2018 election cycle, DeNapoli tried to become a self-proclaimed champion for voter integrity.

In official public records obtained from the Sarasota County Supervisor of Elections, DeNapoli “voted by mail” in the both Republican primary and general elections in 2014. That same election cycle, DeNapoli was a candidate for Florida House Representatives in Sarasota’s 74th district and was crushed in the primary by former State Rep. Julio Gonzalez.

The Floridian also obtained DeNapoli’s official voting history records from the Broward County Supervisor of Elections, where his voting record was also clear. According to those records, DeNapoli also voted by mail in Broward county in both the Republican primary and general elections, despite appearing to already having cast his ballots in Sarasota county.

DeNapoli’s former wife, who in court documents has accused DeNapoli of “withholding” court-ordered child support, alimony, and other agreed-upon items in a divorce arrangement, also voted four times in those same two elections.

Representatives from both the Sarasota and Broward Supervisors of Elections confirmed that they can only access their respective county’s election records and that DeNapoli’s voter information, including his voting history and method of voting, are accurate in both counties. They added that all the ballots of the 2014 election have been destroyed per Florida Statute.

But while the FDLE has closed out this case, the Department of Justice could be up to bat next. During the two elections in which DeNapoli allegedly committed voter fraud, federal candidates were also on all of the ballots in question. When felony voter fraud is committed in elections with candidates for federal office, it becomes a federal crime. For this reason, the Federal Bureau of Investigations (FBI) is said to be looking into the felony voter fraud matter.

But this is not the first time DeNapoli’s election integrity has been brought into question. According to the Palm Beach County Supervisor of Elections, in a sworn statement, DeNapoli stated that he lived in Palm Beach County when he applied to run for a county commission seat in 2006.

DeNapoli’s Homestead Exemption has always been attached to the Hollywood home he inherited from his grandparents, and then was moved to his home in Venice, Florida for the couple of years he lived there.

By his own admission in an email obtained by The Floridian, DeNapoli admits that he used his “girlfriends place” in that sworn affidavit for his candidacy for county commissioner.

On June 24, 2007, DeNapoli filled out and had notarized an application for a gubernatorial appointment to the Florida Legislative Committee on Intergovernmental Affairs for the Crist gubernatorial transition office, and may have committed what many individuals call “Stolen Valor.”

In the application, DeNapoli not only doesn’t state the Palm Beach County address he said he lived at when he ran for the county commission, but he listed that he was honorably discharge from the military, when in fact he only received an “Entry Level Separation” and not an ‘Honorable” separation or discharge.

According to a letter written by the Department of the Navy that DeNapoli obtained and disseminated in a campaign mailer when he ran for office in Sarasota, DeNapoli only served “active duty training” from January 19, 2003, to February 10, 2003, and did not receive an “Honorable” discharge and was “disenrolled.”

Here is where applicants are told to list the last five places of residence: 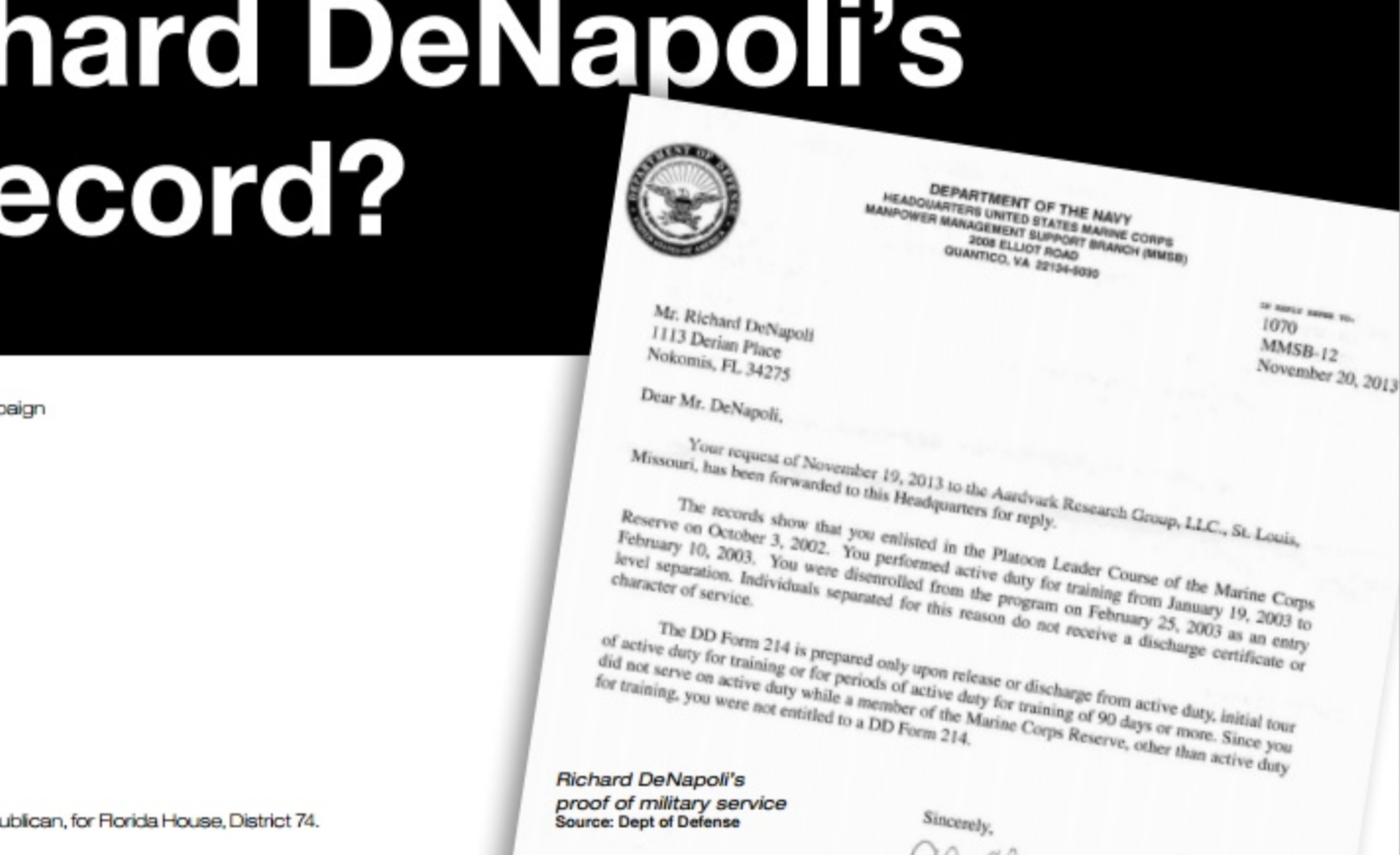 Per the letter, DeNapoli did not receive an “Honorable” discharge as he stated in the application. In addition, a new public records request has been made for a 2020 application for a gubernatorial appointment DeNapoli submitted to the DeSantis administration.

This application is said to be submitted for a position in the  South Florida Water Management District and is currently being reviewed for release to comply with the public records request. The application could also show that DeNapoli also stated that he received an “Honorable” discharge in 2003.

According to the aforementioned FDLE Legal Advisor, this newly filed application could be actionable (second allegation mentioned in the FDLE letter), if DeNapoli stated that he received an “Honorable” discharge again.

A Broward County-centric grassroots organization by the name of Floridians First has also just filled a “Recall RINO Richard DeNapoli” campaign in hopes to have him removed from his position as state committeeman.

Wasserman Schultz Calls Florida a ‘Do Not Travel’ State