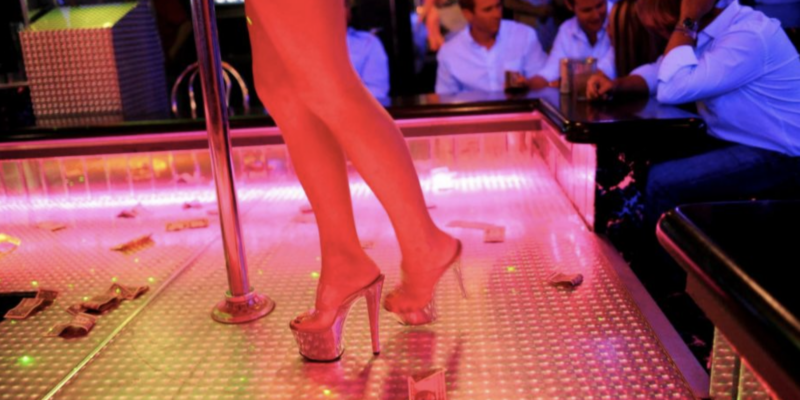 We all know what really happens in the VIP room at strip clubs, and because of the illicit activity that occurs at these clubs —it literally falls in the “lap” of law enforcement—  there is a new bipartisan measure filed in the U.S. House of Representatives to help the federal government understand the extent of the human trafficking and prostitution that exists at these strip clubs (gentlemen’s clubs) across the country.

Florida Reps. Michael Waltz (R) and Ted Deutch (D), two individuals that have probably never stepped foot into one of these establishments, filed the Study to Observe and Prevent (STOP) Human Trafficking Act of 2021.

“Strip clubs are known to be high-risk locations for human trafficking. Unfortunately, the federal government lacks the data necessary to fully understand the scope of this problem at these venues,” said Rep. Waltz. “We have an obligation to ensure young workers at these clubs are protected from any and all forms of trafficking and exploitation. This study is critical to providing Congress with the data we need to modernize our laws and prevent human trafficking in our country.”

"Human trafficking is a scourge on our society that often goes undetected, particularly at adult entertainment clubs," said Rep. Deutch. "There's no question that we can and must do more to combat human trafficking in our communities and protect these vulnerable people. This bipartisan bill will go far to help the Justice Department better understand human trafficking at strip clubs and what must be done to end it."

According to a joint press release, “The STOP Human Trafficking Act of 2021” does as follows:

Over the past two decades, there has been a steady flow of immigrants from all over the world that have found employment and residency in the U.S. as exotic dancers, and many have been trafficked along the way.

In the late 1990s and early 2000s, hundreds of Russian, then Ukrainian, to Hungarian girls would immigrate to the U.S. and be housed by a group of Russians who would put them to work in these strip clubs. In just the past 10 years, since President Barack Obama opened up talks and travel to Cuba, scores of Cuban girls can be found saturating South Florida strip clubs.

In an investigative story, we wrote several years ago on this very same issue, we interviewed no less than 20 girls ranging from 18-26 years of age, all from Cuba, and all working across 7 different South Florida clubs.

They all told the same story. They said that the lax immigration policies with Cuba made it easy for them to travel to the U.S., but if they couldn’t leave for the U.S. for whatever reason, they could come to the U.S. via countries like Colombia, Venezuela, Costa Rica, and Panama