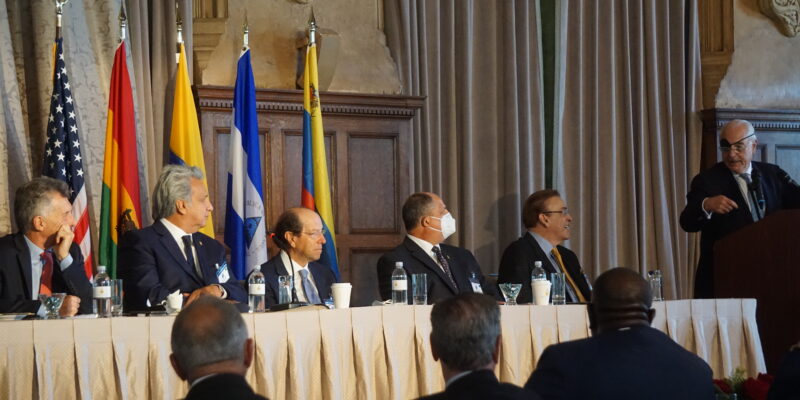 Top-level former elected officials, political experts, national security specialists, five former presidents, and one sitting president were in attendance.  They all agreed that the greatest threat to democracy—not only in Latin America but also in the U.S.— is criminal-enterprise dictatorships.  In particular, Maduro’s Venezuela, supported by Cuba, China, Russia, and Iran, as much of the “Bolivarian money” has been responsible for promoting dictatorships in various other Latin American countries.

“What is drug trafficking, what is organized crime in political terms,” said Luis Almagro, the Organization of Americas State’s (OAS) Secretary-General. “It’s money. Money that is pumped into the democratic system, which obviously gets perforated like Gruyere cheese.  That’s why if there’s something in the world that I would like to do, is to follow Bolivarian money in every single political campaign in this Hemisphere, from Canada to Tierra del Fuego.”

The Floridian spoke to former Miami Mayor Tomas Regalado at the event, where the Cuban-American politician stated that Cuba was actively trying to take over democratic nations in Latin America.

“There is no doubt that Maduro and his regime are tied into Cuba in organizing what they think is the campaign to take over democratic countries in Latin America,” said Mayor Regalado. “So, I think that the Biden administration needs to understand that Venezuela is not a regional problem, it’s a national security problem."

Regalado added that because both Nicaragua and Bolivia were “following” Venezuela’s lead, President Biden needed to “ take a stand in Latin America” because “our backyard is on fire.”

Iliana Lavastida, director for Diario Las Americas and moderator for the “Dictatorships in the Americas” panel, stated that we need to not only denounce “democracy’s dire state” but also “foreign intervention,” adding that not only the Cubans have interfered in Venezuela but also China, Russia, and Iran, which make it “a national security threat.”

Douglas Farah, a Latin America foreign policy expert that is contracted by the U.S. government to assess rising threats in the region, the U.S. and other nations agrees, saying he believes that Russia poses the biggest threat, and appears to have the most influence in the region because “they have the ideological friendship” with these regimes.

Clearly violating U.S. sanctions, oil from Venezuela has been ending up in China. According to Jorge Jraissati, president of the Venezuelan Alliance and a fellow at the Abigail Adams Institute as stated in an op-ed in the National Review. “In February, China bought three-quarters of all Venezuelan oil exports. As a result, Venezuela’s oil export increased to 700,000 barrels per day in February, its highest level in a year. Moreover, the purchases were made through a series of “phantom clients,” which “enabled China Petroleum Corporation to report zero oil purchases from Venezuela since late 2019.”  All a sham.

"If it is investing in strategic industries, strategic assets that's something that countries need to look at very carefully," continued Blinken.

Regalado agreed that the U.S. must think carefully about its strategic assets in Latin America, particularly Venezuela. When asked about the possibility of a foreign takeover of American companies, Regalado said, “I think the U.S. is right in not making them (U.S. companies) leave because the void will be taken by the Russians and by the Chinese” and warning that if the U.S. did not hold the line in Venezuela,”eventually the Venezuelan government will take over whatever is left of the American industry.”

As to Russia, in a bizarre visit to bolster relations, Maduro received a samurai sword as a gift from actor Steven Seagal, who was visiting Venezuela as a representative of Russia.

"I had a very friendly, affectionate encounter with Steven Seagal," Maduro said on Wednesday in a broadcast on television in which he referred to the U.S. actor as "my brother."

We talked about mutual friends like the President of Russia, Vladimir Putin.

"We are going to shoot a movie together that will be called 'Nico Ma Duro de tumbar,' a wordplay on his name meaning 'Nico Ma is hard to knock down,'" Maduro continued.

"It is the new Steven Seagal film. We are going to fight the demons, the bad guys. I am 'Nico.'"