Senator Marco Rubio (R) took issue with an “inaccurate” news report that said the COVID-19 death rate in Florida showed “no signs of slowing down” and pointing to the downward trend of deaths related to the virus.

Sen. Rubio doesn’t specifically name the media outlet, but he may be referring to an NPR story that leads with that exact statement.

“Florida’s surge of COVID-19 cases shows no signs of slowing down. The state Department of Heath reported Florida set another daily record Thursday, with 10,109 cases, surpassing Saturday’s record of 9,585 cases. That brings Florida’s total confirmed coronavirus cases to nearly 170,000 and a death toll of 3,617 (with 67 new deaths reported Thursday).”- NPR

NPR uses the phrase to specifically describe the positive cases in the state and not the death count, so that is why we are speculating that this was the story Rubio was referring to.

Rubio’s claim that the “daily mortality rate” has been in decline for some time now is accurate. According to the Florida Department of Health, since the spike in deaths 30 days ago that Rubio refers to,  the drop in COVID-related deaths has dropped significantly.

“10000 deaths in #Florida due to #Covid_19 is a terrible tragedy, ” stated Rubio “However it is inaccurate to report that the death rate shows “no sign of slowing down” The daily mortality rate has been steadily dropping since hitting an alarming peak 30 days ago Hoping this trend continues” 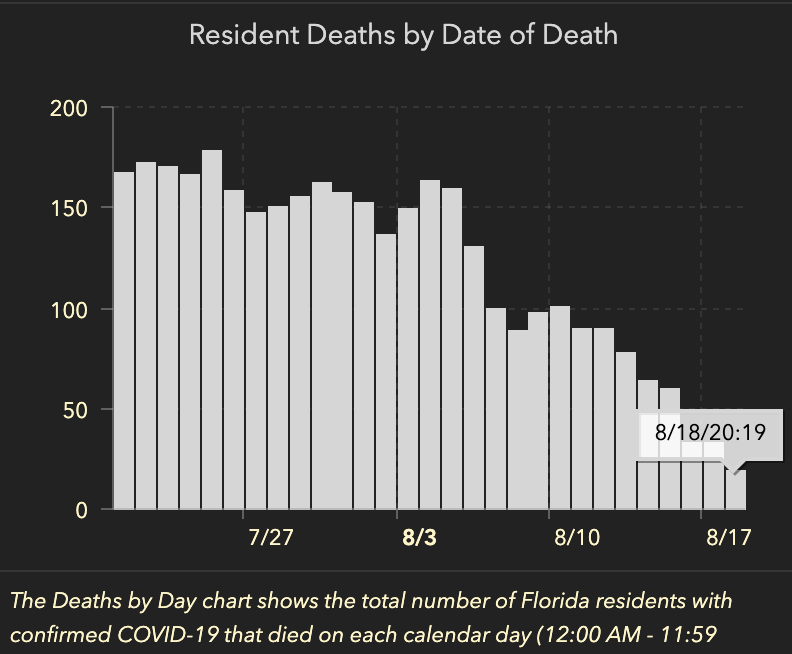 But just as the daily reported deaths on August 18th stood at 19, Congressional Democrat Debbie Mucarsel-Powell (D) tweeted that Florida had reported 174 new deaths, a number that broke the 10,000 death count in the state, and added, “another day without a statewide mask order.”

It’s not sure where Rep. Mucarsel-Powell got her day-specific death count, but it wasn’t for any day this past weekend.

** Another day without a statewide mask order **