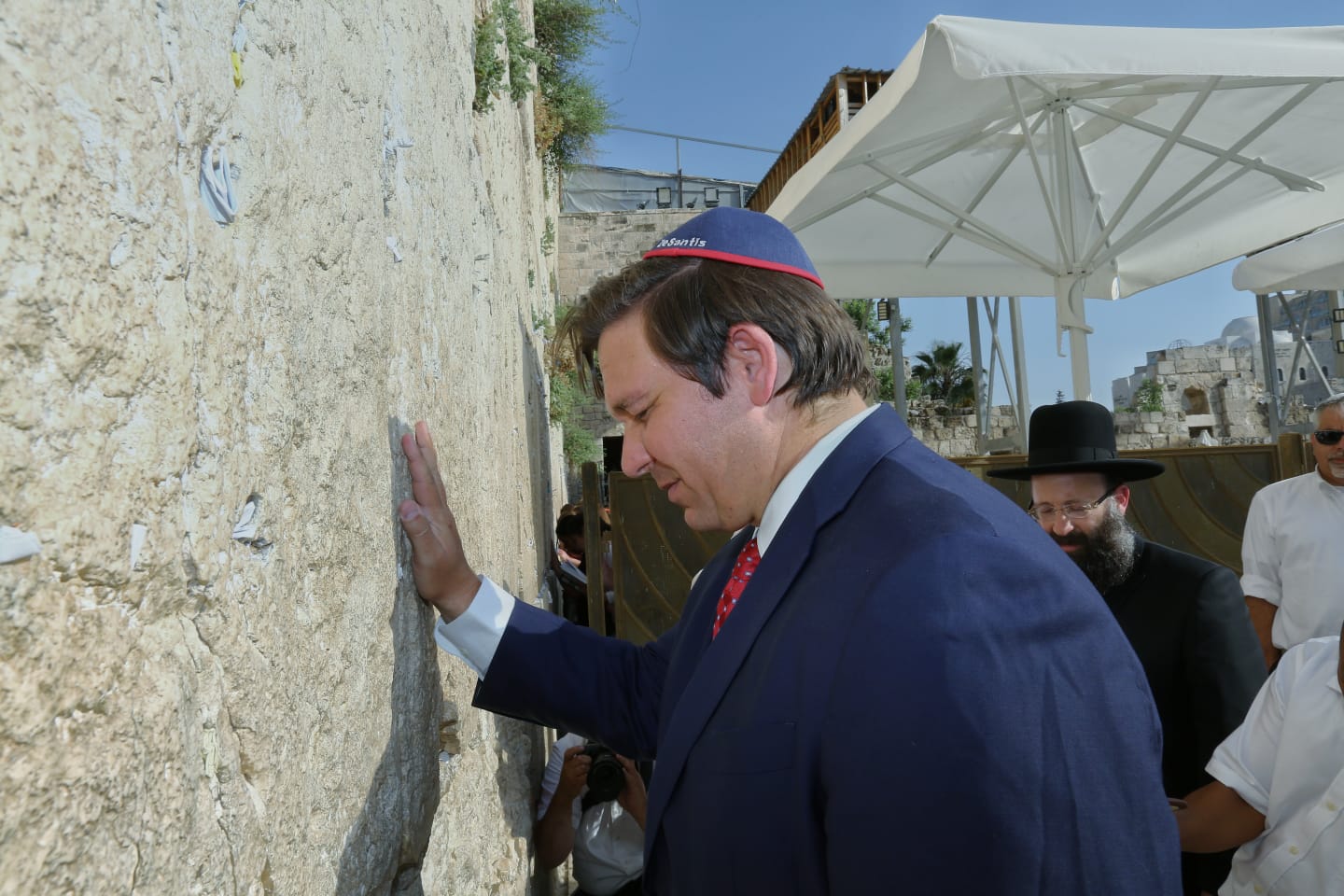 From Israel With Love

Florida Governor Ron DeSantis and the Florida delegation are back from their historic trip to Israel, and are already back to work. The focus for Gov. DeSantis, CFO Jimmy Patronis, AG Commissioner Nikki Fried, and AG Ashley Moody, appears to be hurricane preparedness.

Here is the entire Israel trip in a nutshell. >> READ MORE

President Donald Trump is the first Republican president to acknowledge the LGBT community, and Democrats are besides themselves, and are saying that Trump wants to send gays to internment camps.

Singer Cher, actually was the one who tweeted that Trump getting ready to round up gays and jail them. Ridiculous. READ MORE

“Democratic presidential candidate Pete Buttigieg, the first openly gay candidate, had this to say about the start of PRIDE month around the nation.

“Thanks to leaders like Marsha P. Johnson and Harvey Milk, I have faith in the possibility of change and growth in this country. There is still more work to do, but let us take a moment and celebrate the gains we’ve made this “

“Pride is about standing up to the voices of injustice and discrimination and declaring that everyone has the right to live proud, open, and free. It’s about love. We join the LGBTQ community in celebration and remember the fight is not over. We march on.”- VP Joe Biden

Trump threatens Mexico with tariffs, lawmakers respond by HISPOLITICA : President Trump has maintained a hard-line stance on immigration, and it culminated this week with the President informing that he will slap a 5% tariff on all imported good from Mexico.

Support grows for Ted Cruz & Ocasio-Cortez by HISPOLITICA: Say it ain’t so!

But it is so, as the most progressive Democratic and most conservative Republican members of congress have joined hands and have vowed to work together towards a common legislative goal.

Trump’s Tariffs Attract Criticism From Both Sides by The Floridian’s Daniel Molina: President Trump has maintained a hard-line stance on immigration, and it culminated this week with the President informing that he will slap a 5% tariff on all imported goods from Mexico.

Ted Yoho backs Trump’s Mexico tariff by The Floridian’s Javier Manjarres: Both Republicans and Democrats have shown their disappointment over President Trump’s announcement that he will be slapping Mexico with a 5% across the board tariff.

President Trump Holding Orlando Reelection Rally by The Floridian’s Daniel Molina : President Trump has already involved himself in rivalries with many 2020 Presidential candidates.

Rubio says House will pass disaster relief bill next week by The Floridian’s Javier Manjarres: The historic disaster relief legislation that Senate Democrats first blocked, then refused to address, and that the House of Representatives is supporting, has once again been delayed.

Democrats are saying that the “GOP” is blocking the legislation, but in reality, the responsible parties for blocking the bill are (3) Republican legislators, not the entire political party.

Rep. Matt Gaetz (R) calls out TB Times reporter for sharing a blog that all-but praises the assault against him by an old Democratic congressional opponent.

Rep. Debbie Wasserman Schultz (D) had herself one busy weekend. The veteran congresswoman attended a soccer match, and attended services at the New Jerusalem First Missionary Baptist Church in Hollywood.

Outside of taking on the Venezuelan dictatorship of Nicolas Maduro, Sen.Marco Rubio (R) is also actively addressing the longstanding China threat.

But we must reorient our policies to the great emerging challenge of our time, the great power competition with #China Communist Party & #Putin’s #Russia

Both Republicans and Democrats expressed their condolences for the victims and the families of those gunned down in Virginia. Florida Reps. Alcee Hastings (D) and Lois Frankel (D) joined the choir of support.

House Speaker Jose Oliva and other Republican leaders Friday condemned Rep. Mike Hill, R-Pensacola, for his “laughter and refusal to push back” on a question about whether he’d introduce legislation allowing the execution of homosexuals.

GILLUM QUESTIONS COULD FOCUS ON CAMPAIGN MONEY by News Service of Florida : TALLAHASSEE — As federal prosecutors poke around at issues involving Andrew Gillum, they could be looking into potential “misuse or misreporting” of campaign money tied to the 2018 Democratic gubernatorial nominee, according to Gillum’s attorney, Barry Richard.

Fresh off her trip to Israel, AG Commissioner Nikki Fried will be attending a community meeting in Miami to help promote Lyft’s grocery access program.

State Rep. Anthony Sabatini (R) was in St. Augustine to address Florida’s Federation of Young Republicans at their annual meeting.

State Rep. Anna V. Eskamani (D) is a self-style and “unafraid progressive,” but is she pro-Choice. Wait…she worked at Planned Parenthood. Nevermind.

Florida CFO Jimmy Patronis is also back from Israel, and is pushing hurricane preparedness now that the season is upon us.

Joe Biden is still leading in the average of polls, but in the all-important first state of Iowa. Uncle Joe’s lead is only 4 points over Sen. Bernie Sanders.

Hearing word that Russia, Syria and, to a lesser extent, Iran, are bombing the hell out of Idlib Province in Syria, and indiscriminately killing many innocent civilians. The World is watching this butchery. What is the purpose, what will it get you? STOP!

Trump began #PrideMontho by praising the despicable anti-LGBT bigot Franklin Graham. But that makes sense because Trump has been the most anti-LGBT President of the modern era as he’s imposed the hateful policies Graham wants.

Cares for the most needy, including Venezuelan migrants. Among the crew there are 14 Venezuelan doctors. The migration authorities of Colombia will begin this Tuesday the process of renewing the Special Permits of Permanence (PEP) to thousands of Venezuelans who have taken refuge in that neighboring nation fleeing the serious political and economic crisis in their country.

The measure would benefit more than 68,000 Venezuelans who were issued their PEP between August 3 and October 31, 2017.

The last 18 years since 9-11-01 focused on counter-terror. And that remains a persistent threat.

But we must reorient our policies to the great emerging challenge of our time, the great power competition with #China Communist Party & #Putin’s #Russia

50 years ago, LGBTQ Americans took a bold stand against bigotry, discrimination & persecution. Now, millions proudly & unapologetically march to celebrate LGBTQ Americans’ cultural contributions. I am proud to stand with ALL of you to fight for full & true equality

Florida grandma arrested after toddler given fatal dose of methadone1.5K

Brett Taylor Aitken, 59, of St. Augustine was charged with aggravated manslaughter and booked into the St. Johns County Jail, according to a news release.

The St. John’s County Sheriff’s Office was called to Aitken’s home in December to investigate her grandson’s death. An autopsy later ruled the child died of “methadone toxicity.”

Investigators say Aitken had unlawfully taken methadone prescribed to someone who had died into a bottle containing the child’s allergy medicine “for a rainy day.”

Aitken reportedly told detectives she forgot she had done this and gave the child what she thought was allergy medication.