After about two years of almost complete silence, the special counsel in the Russia collusion investigation, Robert Mueller, has broken his silence.

Mueller Addressed reporters and America during a press conference at the Department of Justice, where he reiterated that there was no collusion between the Trump campaign and Russia, but did say that he did not have sufficient evidence to file charges against President Trump or anyone else.

As you can imagine, congressional Democrats began to lick their lips, using Mueller’s words to solidify a legitimate call for… READ MORE

No sooner that Robert Mueller concluded his press conference where he announced his resignation as special counsel, just about all of the Democratic presidential contenders called for impeachment proceedings against President Trump.

“What Robert Mueller basically did was return an impeachment referral. Now it is up to Congress to hold this president accountable, said Kamala Harris We need to start impeachment proceedings. It’s our constitutional obligation.

“This is as close to an impeachment referral as it gets. Robert Mueller could not clear the president, nor could he charge him — so he has handed the matter to Congress, which alone can act to deliver due process and accountability.”- Pete Buttigieg

Oh Bernie Sanders. >>> “Given the reality that we have a president who believes he is above the law, Congress must continue its investigations. If the House Judiciary Committee deems it necessary, I will support their decision to open an impeachment inquiry.”

Julian Castro says that if he is president, he wont hesitate to use the recess appointment option. READ MORE

Senator Marco Rubio is making all the right enemies around the world. Rubio is no friend of Putin, Maduro, and the Chinese, who have depicted him as a dancing devil. Devil maybe, but dancer? No way. Word is that Rubio has two left feet.

Planned Parenthood’s legal abortion practice in Missouri is on its ‘last breath’ this week, as the state is about to shut down the group’s last remaining abortion clinic. Florida Congresswoman Debbie Wasserman Schultz (D), a strong proponent of a woman’s right to choose, asserted the legality of the practice of abortions. READ MORE

Rep. Omar deletes anti-Latino immigration tweet by HISPOLITICA Controversial U.S. Rep. Ilhan Omar (D) has once again managed to infuriate and insult, a large part of the of the American public with another ill-advised, racially-tinged remarks.

Omar, who first tweeted now-deleted anti-Israel remarks, including stating that American politicians are bought off by the pro-Israel lobby, all-but tweeted that Latinos are victims of “racism” in a Trump “merit based” immigration system. READ MORE

TALE OF TWO TEDS – Rep. Ted Yoho (R) is reminding Americans that House Democrats voted 50 times against #bornalive bill that would give medical attention to babies that survive an abortion.

Florida’s other Ted, Rep. Ted Deutch, who voted against the Born Alive bills, is out pushing the narrative that Mueller believes Trump lied about everything he said about “no collusion” and “no obstruction.”

Not sure where Deutch gets that Mueller believes obstruction occured. Wouldn’t have Mueller just come out and stated that?

Like a good Democratic loyalist, Rep. Debbie Mucarsel-Powell is pushing her political party’s talking points, saying that the Trump administration is attacking the American democracy, and pushing for continued congressional investigation into the president.

Is there really a “cover up” being perpetrated by the Trump administration? READ MORE

Gov. Ron DeSantis continues his business development trip to Israel, making history by holding the first ever cabinet meeting at the US Embassy in Jerusalem.

From the looks of the selfie they posted, Florida’s cabinet, AG Ashley Moody, CFO Jimmy Patronis, and AG Commissioner Nikki Fried, appear to be having quite a good time on the trip.

Hurricane season is upon us (again) and Senators Marco Rubio and Rick Scott are taking the lead in reminding Floridians about properly preparing for the worst. After Hurricanes Irma and Michael made landfall, Floridians better be listening, and making preparations.

Florida is racing towards a severe shortage of qualified nurses and medical caregivers – a shortage that if left unchecked – will greatly reduce the quality of and access to medical care. This is especially true for women where there is a nationwide shortage of obstetricians and gynecologists. READ MORE

On sanctuary cities bill, Pinellas sheriff tells immigrant community, ‘You should not be concerned.’ by Tampa Bay Times

Sheriff Bob Gualtieri sat down at the front of the sanctuary Tuesday night and pursed his lips.

He adjusted his tie.

Is the race over? If you go by these poll numbers, Biden is the clear choice to be the Democratic Party’s nominee

How do you impeach a Republican President for a crime that was committed by the Democrats? WITCH-HUNT!

Mueller: “The constitution requires a process other than criminal justice system to formally accuse a sitting president of wrongdoing.”

Mueller found obstruction & now the WH is part of an ongoing cover-up.

Senator Marco Rubio has been a thorn in the side of Maduro, and has gone after the embattled Chinese Huawaii telecom company. So, no Maduro is striking a deal with the same chinese company. Hmmm?

Venezuelan President Nicolás Maduro announced on Thursday an “immediate investment” in the Huawei company, indicated by the United States of spying in favor of China, to help Venezuela install the 4G mobile network technology, which for now works intermittently in The main cities.

“I have ordered an immediate investment with our Chinese brothers, and Chinese technology, Huawei technology, ZTE, and all Chinese companies and all Russian companies for us to raise the capabilities of the entire communications system and make the 4G system a reality, “Maduro said at a ceremony with the military in Caracas.

This week, President Donald Trump imposed an executive order that prohibits US companies from doing business with foreign companies that allegedly try to spy on the country and that has ended up in a veto on Huawei. 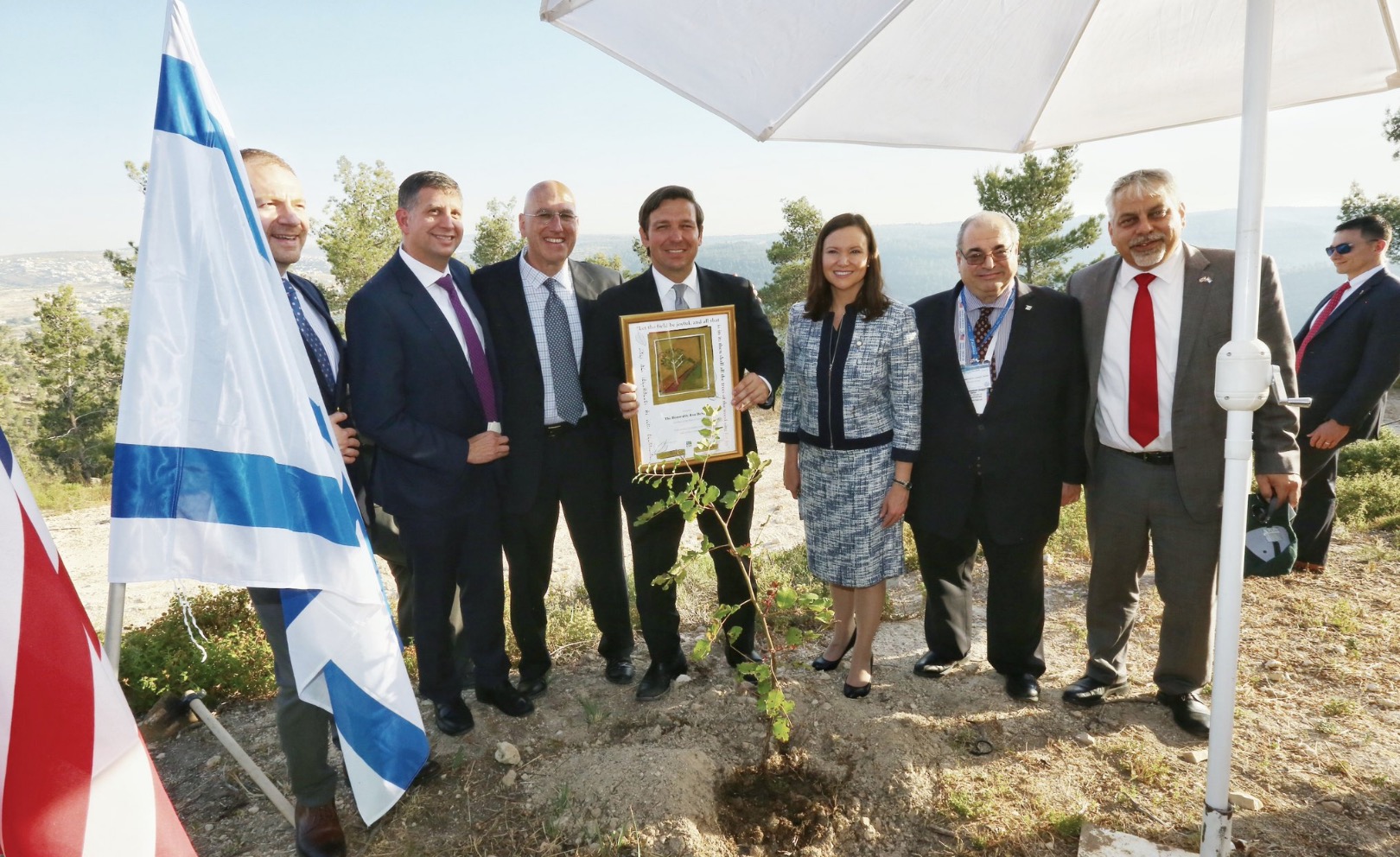 Today @AGAshleyMoody joined me as I planted a tree on behalf of the people of Florida in the beautiful John F. Kennedy Peace Forest. As this tree grows, it will serve as a symbol of the strong friendship between Florida, the United States and the nation of Israel.

Congress has a constitutional responsibility to be a check on the executive through its oversight role. When we subpoena, the White House must comply. If it does not, I support Congress filing lawsuits to ask the Courts to enforce. So far, the courts have sided w/Congress.

Should the President ignore a final federal court order to turn over documents or information, I would consider it a threat to our careful system of checks and balances and would therefore support an impeachment inquiry

This inquiry would better empower congressional investigators to attain documents and testimony & get the facts. My hope is that the President complies and Congress is not forced to be taken down the path of impeachment. But no one is above the law, not even the President.

A partner with a St. Petersburg law firm presently serving as the president of the city’s bar association was placed under arrest on Monday.

According to online records with the Pinellas County Sheriff’s Office, Gregory Hoag was booked into custody at approximately 2:55 p.m. on Monday by St. Petersburg police for a domestic battery offense. He subsequently left on his own recognizance at 3:38 p.m. on Tuesday. READ MORE